Lost Dogs of the Everglades 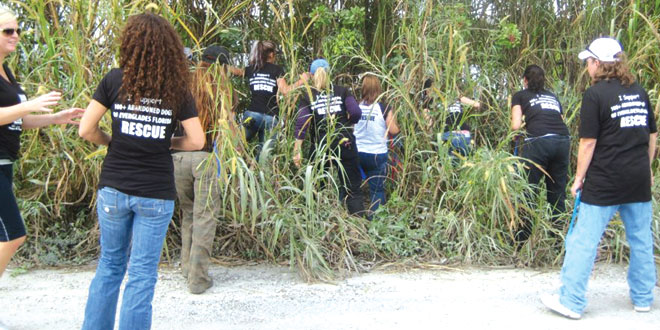 Brenda Midolo of Verona Walk in Naples has been rescuing stray dogs for the majority of her life. Amy Roman of Miami has rescued over 900 dogs in just under two years. What do these two women on opposite ends of the state have in common. They both have rescued dogs that were senselessly dropped off in the Everglades. Left to fend for themselves, these domesticated animals don’t survive long in the snake, alligator and disease-infested Everglades.

Brenda, a retired veterinarian technician, owned 13 rescue dogs at one point while living on an 11-acre piece of property in Maryland. Now in Naples, she has three small dogs, two of which were rescues. Alli (as in alligator) was found by a woman along the Tamiami Trail as she was traveling from Everglades City to a doctor’s appointment in Naples. Brenda just happened to be at the same doctor’s office. She offered to take the dog – a “chorkie,” or chihuahua/yorkie mix.

“There she was, all muddy; she was shell-shocked, just staring into space,” explains Brenda. “I took her to the vet and he couldn’t believe it.” Little Alli was “behind the eight-ball.” She had worms and fleas and needed a blood transfusion. “The vet 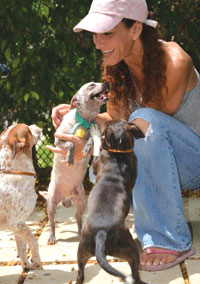 Amy with some of her rescues; all the dogs pictured found amazing homes. SUBMITTED PHOTOS

told me ‘no one is looking for her,’” adds Brenda.

“I started thinking about who would be so cruel to do this and then I saw something on TV about dogs being dropped off in the Everglades. I started googling it and I learned about the organization through research.”

The organization Brenda refers to is Amy Roman’s “baby.” Based out of Miami, 100 Plus Abandoned Dogs of Everglades Florida, a 501(c)3 non-profit, was started by Amy only two years ago. In that time, she and her team have pulled 900 dogs and 40 cats out of the Everglades. “We’re talking about the rural parts of Miami,” Amy explains. “The Everglades, Redlands, Homestead, Florida City; nobody is monitoring what is happening to these animals. These people just don’t look at animals like we do.”

Amy says the population of homeless dogs in this area is so overwhelming, she feels her work is only putting a dent into the problem, and it breaks her heart. “Miami-Dade Animal Control is so overwhelmed; they are getting 60 to 100 owner-surrendered pets every day.” Amy doesn’t consider these dogs very lucky because many will simply be put down due to illness and overcrowding.

100 Plus utilizes animal hospitals, foster homes and a 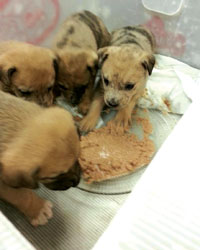 doggie daycare, “Camp Canine,” to house the animals her team finds when going out on a rescue mission. On their last mission they rounded up 23 dogs. “Everything we do is based on donations and availability for the animals through our partner services. So we know how many we can save every time we go out. How do you pick and choose which ones to take? Do you have any idea how heartbreaking it is to drive away with a full van of dogs and have ones left behind chasing after you to be rescued? I could go out every day and pick up 20 to 30 dogs.”

Loyal supporters of the cause donate food, time, their homes and money to help Amy. Every time enough money is raised, a team goes out on a rescue. Up to 100 people at a time will go out to help, but Amy always warns, “you pick up a stray on your own without consulting a team leader and you can consider it yours.”

On July 28, Amy will be taking Jane Velez-Mitchell of CNN out on the streets with her for a typical rescue. Amy openly admits to using the media as an outlet to her plight.

It took ten hours to bring Candy to safety. She was adopted by one of 100 Plus’ veterinarians.

“I have been on every news station possible (out here), on the front of the Sun Sentinel and was rated the number one animal rescue of Southwest Florida by the Miami News Times. I’ve been labeled a media whore and I’ll take it all day long, because once you see what’s going on out here with your own eyes, you would be shocked. It’s like a third world country.”

Dog fighting, cock fighting, animal sacrifice and now “trunking” are all still alive and well in the east Everglades. Trunking, Amy explains, is when two dogs are put in the trunk of a car while the car is driven around, music blaring. The dogs are meant to fight to the death in the trunk – and they do.

When asked what can be done, Amy has no answer. “I don’t even know what the solution is. I just try to keep saving them. I can’t give up but I know I can’t save them all. I can only do what I can.”

According to the rescue’s website, the mission is “to rescue them, bring them back to health, and show them that not all humans are bad. We want them to know that love and a warm 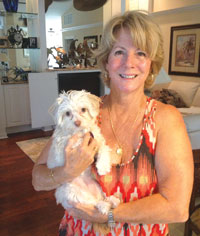 bed are just around the corner. Beyond that, we work to raise awareness about this brutal reality happening right in our community… We have saved so many, and yet, thousands more are still out there, suffering. You will see them roaming, searching for food and water. They are reproducing and bearing litters of puppies who are also destined to starve and suffer slow, painful deaths. We receive calls night and day from locals in the area begging for help. The farm workers have resorted to shooting the dogs to prevent them from attacking the livestock because they are starved. As a small group of volunteers with heavy hearts and empty pockets, we are not beyond begging. Closing our eyes will not make this go away.”

“These are our Everglades too,” states Brenda. After all, her little Alli was found on the side of the road in Collier County’s Everglades. There are many more stories similar to Alli’s that take place in our own backyard all the time. Brenda would take in more animals if she could. “I’ve never met a dog I didn’t like,” she adds.

Amy echoes these words, “I’ve always loved animals more than people. They are unconditional, innocent and grateful. My dream

Brenda and her three dogs, Bella, a rescue, Alli(gator) and Oliver. PHOTOS BY NATALIE STROM

would be to have my own van with the rescue’s name on the side so we don’t have to rent one for each trip.” Her ultimate dream is to have a state-of-the-art adoption center where all the dogs could run free rather than being locked in cages while waiting for a home.

“I told her, if I ever win the lottery, you’ll have a full facility,” adds Brenda.

Learn more about the Amy Roman’s rescue at 100plusabandoneddogsofevergladesflorida.com.

There are many ways to help fight the plight of homeless and helpless animals right here in Collier County. Marco Island’s own For the Love of Cats spends countless hours and dollars saving the lives of local cats and kittens. Brooke’s Legacy Animal Rescue in Naples rescues dogs and cats, placing them in foster homes until they find their forever home. The Humane Society of Collier County sees more than its fair share of abused or injured animals that are also in need. Whatever outlet you choose, you will never lose when you rescue an animal. They NEVER forget it.