Looking For Pierre – a Dapper Dolphin! 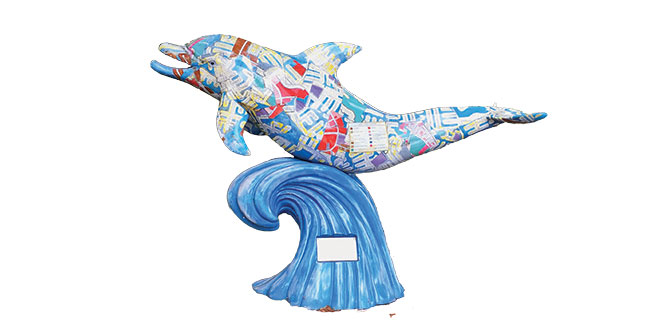 “Homeland” will be in storage during the Mackle Park construction.

Pierre, an artist-created fiberglass dolphin, was last seen looking dapper wearing a beret and scarf of brightly painted squares. He was created in 2003 by Geoffrey Stephenson, a fifth grader at Tommie Barfield Elementary School, with his art mentor Sidney Ann Pitchford.

Pierre was part of the Dolphin Debut, which brought 36 life-sized dolphins to life in the hands of local artists, who contributed their time and talent to help raise money for the Marco Island YMCA and the Art League of Marco Island. The auction raised $123,000 for the two

organizations. For six weeks the “celebrity dolphins” brought their artistic messages to public places on the island.

Artist Denise Santos of Goodland is on a mission to locate and revive the dolphins that she can find. “It will take more than just a touch-up to bring them back to life,” says Denise. She has restored three dolphins, and is actively looking for other members of the “pod.” The Florida weather is brutal to a fiberglass dolphin. Their vibrant colors are now gone, fins and tails missing, and others are breaking apart 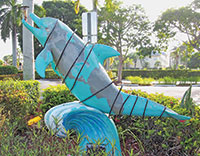 at the seams. A few local residents have taken to “giving new life” to a few dolphins by commissioning their rebirth.

The original 36 dolphins were auctioned off to various bidders and some may have left the island, but a small “pod” stayed in Marco. Some were displayed outside various businesses and a few became part of private gardens and landscapes.

Where Are They Now?

Dolphin #9: Homeland was painted by artist Robert A. Eder, complete with an accurate land use key, revealing the intricate layout of Marco Island. Homeland was located at Mackle Park 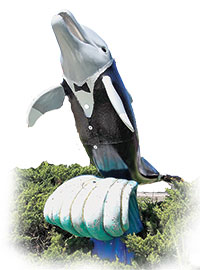 “Best of Jeeves” can be seen in front of Arturo’s Restaurant.

and now will be kept safely in storage awaiting construction of the park’s new building.

Dolphin #24: World Freedom, by artist Kathleen Eichman, has a message of hope and peace. You can see World Freedom at Residents Beach.

Dolphin #31: Chefantastic, painted by artist Kevin Scobie in a chef’s uniform, and entices diners with a sumptuous gourmet offering at Marek’s
restaurant.

Swiss Army knife, was created by Chris Lombardo of Woodward, Pires and Lombardo, PA. Denise Santos found the dolphin in disrepair in front of Marco Island Office Supply. She has given this “porpoise” a new “purpose,” and it is now referred to as Captain Jack Sparrow.

Dolphin #25: Pierre, was found by Denise Santos, and through a commission from an island resident, Southwest Fantasy was reborn with a new identity and a new home.

If you happen to come across a member of the original 2003 Dolphin Debut in need of TLC or a new home, please contact Denise Santos at www.denisesantosdesigns.com.