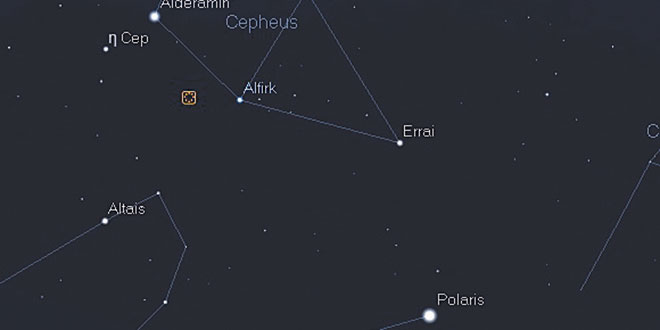 We hardly ever look north in this column, and it’s time to fix that. Now, locate Polaris, the pole star, by locating the finder stars in the Big Dipper. What? Where is the Big Dipper you say? That’s the first lesson to learn tonight: We have no Big Dipper in the sky on evenings during November and December! To find the pole star, locate the upside down W-shape of Cassiopeia and drop your eye straight downwards. Polaris is the brightest star seen before you reach the horizon.

Notice that Polaris is far lower here in Southwest Florida than you may be used to. It is in fact just 26 degrees above the horizon. The star always matches the observers latitude — a fact navigators have been using for centuries. Before celestial navigation was fully developed, navigators would sail north or south until Polaris matched the latitude of their final destination then would sail straight across the ocean. Not a very efficient way of getting around, but it works!

First time star gazers inevitably remark about how dim Polaris is; there are dozens of stars in the sky brighter. For some reason, there is a prevailing myth that Polaris is a very bright star. Polaris is only magnitude 1.98 and is very slightly variable, not enough to be noticeable to the naked eye.

The region of the North Celestial Pole has a couple of peculiarities. For example, most stars move east-to-west as the Sun does, but below Polaris, the stars move west-to-east. You’ll have fun trying to explain that one to a child! Another is that star gazers always define north as the direction of Polaris. Moving your eyes downward from Cassiopeia or upwards from the horizon are both defined as moving northwards even though they seem to be opposite directions. It’s a little funky until you get used to it.

The region immediately around the North Celestial Pole is rather barren of deep sky objects. However, the Milky Way does run through nearby Cassiopeia, and there are a number of star clusters available for binocular users. One cluster, the Double Cluster, is located halfway between Cassiopeia and Perseus and is plainly visible to the naked eye as a hazy patch if the observer is in a dark sky site.