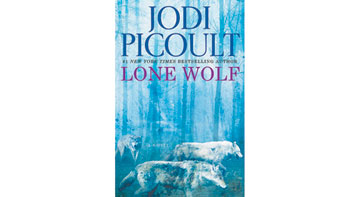 This is Jodi Picoult’s 19th novel and I would have to say I found it one of the most engrossing of those she has written. Many of the books I have reviewed for you have had some type of moral dilemma involved and this is, once again, one of those books. All through life we encounter moral dilemmas. When we are young it might be should we copy the answers to a test we are taking from the person sitting next to us, who is known for getting good grades? A little later in life it might be should we tell the cashier at the store that she has given us too much change? As we grow older the dilemmas we face become more challenging and, perhaps, of more significance in our lives and the lives of those around us. Ms. Picoult has hit us with one of the ultimate dilemmas. When is it right to make the decision to end life support for someone we love?

In Lone Wolf we are faced with two stories. The first is the story of a family which has been split by the fact that one of its members, Luke Warren, the father/husband, is enthralled with the lives of wolves. So much so that he has chosen to go off and live with them, in the wild, for two years, leaving his family of a wife, young son and daughter behind. When he returns to civilization his whole being has changed. Everything in the world that he now has to face no longer seems normal. The life he led with the family of wolves who accepted him into their pack is what is now the norm for him. Needless to say, the whole family dynamic has changed leading to his wife filing for divorce, his son leaving to go off on his own to live in Thailand, after a confrontation with his father, and, eventually, his daughter coming to live with him. One of the stories we hear is told in Luke’s voice and is the story of his life while living with the wolves. Not just the day to day life but also the way in which a wolf pack lives and why it lives in that manner. We get to experience how he came to be, very slowly, accepted into the pack and what he had to do to earn that acceptance. I found it quite fascinating.

The other part of the story is told through the eyes of the other family members, individually, after a life altering event occurs. Cara, Luke’s 17 year old daughter, has gone to a party with friends, and calls him to come and get her when the party seems to be getting out of hand. On the drive home they have a horrible automobile accident. Cara is badly injured, but Luke’s injuries are so severe that they have left him in a vegetative state. Upon learning of the condition of his father, Edward, who has been gone from home for six years, returns from Thailand. Before Luke went to live with the wolves he had made his son promise that if anything ever happened that would leave him unable to live a normal life he would make sure that he would be allowed to die. What’s more he had shown him that he had made provisions to be an organ donor. After hearing the doctor’s decision that Luke would not recover from his injuries to the extent that he could live any kind of normal life, Edward is prepared to follow his father’s direction and end all life support. Cara, however, is equally determined that her father can recover and that there is no way she would possibly allow Edward to end his life. Unfortunately, she is only 17 and not old enough to legally make that decision. She has lived with her father for the last 4 years and taken over many of the duties normally done by an adult while her father tended to the wolves he cared for in a wolf sanctuary. Because of this she feels she is equipped to make that adult decision and is willing to fight vigorously to stop Edward from following through in doing what he thinks is the right thing. Ultimately this tears the family further apart and ends up with the police and the courts becoming involved.

Reading Lone Wolf will give you a fascinating lesson in the lives of wolves and the hierarchy of the pack and how it functions to make it strong. At the same time it will let you examine your beliefs in when is the right time to end life support for someone or, indeed, if there is ever a right time at all.