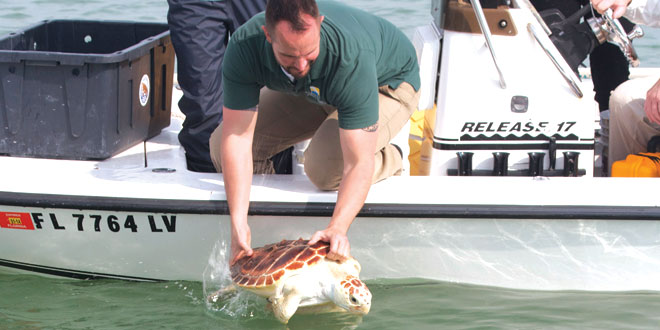 The Conservancy of Southwest Florida released Sassy, its female loggerhead sea turtle into the Gulf of Mexico near the Ten Thousand Islands on Tuesday, Jan. 19. Born on Sanibel Island, Sassy was transferred to the Florida Atlantic University lab at Gumbo Limbo Nature Center in Boca Raton, where she was part of a gender study linking nest temperature to the gender of hatchlings.

Following her two months in the ongoing sea turtle gender study, Sassy was brought to the Conservancy of Southwest Florida. In 2012, Sassy became the first resident of the 5,000-gallon saltwater tank in the Dalton Discovery Center at the Conservancy Nature Center. Sassy has served as an ambassador for the entire species and provided visitors with an increased appreciation for marine life and conservation as she grew to an appropriate size to be released. Weighing in at more 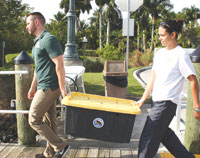 Sassy travels from the car to the boat.

than 30 pounds and more than 45 centimeters, Sassy was ready for her return to sea.

Making her way in a green and yellow bin, Sassy was transported from the Conservancy in Naples to the Goodland Boat Park where she boarded a small skiff with David Webb, Dave Addison, Whitney Swain and Paige Lansky, all of the Conservancy. Sassy took a quick boat trip out to a safe and quiet spot where she was taken from the bin and gently placed in the water. The minute she went in, Sassy went under and wasn’t to be seen again.

“Sassy has been a favorite of Nature Center visitors, staff and volunteers and has provided opportunity for education and dialogue on sea turtle protection,” said Conservancy of Southwest Florida Director of Education David Webb. “Sassy was released at Gullivan Bay, south of Marco Island, away from 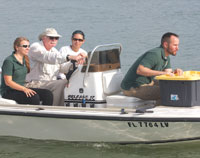 Heading out to Gullivan Bay.

heavy boat traffic. However, Sassy faces dangers in open water, including boat traffic, plastic bags and other litter, commercial fishing and sharks. Our hope is that she makes it out into the Atlantic, and returns to the Gulf Coast in 20 to 30 years to lay her eggs.”

The survival and study of sea turtles is a mission of the Conservancy of Southwest Florida Sea Turtle Monitoring and Protection Program. Through patrolling beaches, marking nests, tagging turtles, counting hatched eggs and educating the community, the team works to protect and monitor the success of loggerhead sea turtle nests.

The team at the Conservancy is ready to play host to another loggerhead any time. According to Webb, “If for some reason another sea turtle needs a home, we will have room in our tank to raise it and return it to the wild when it’s ready, just like Sassy.”