Local News From the Nest 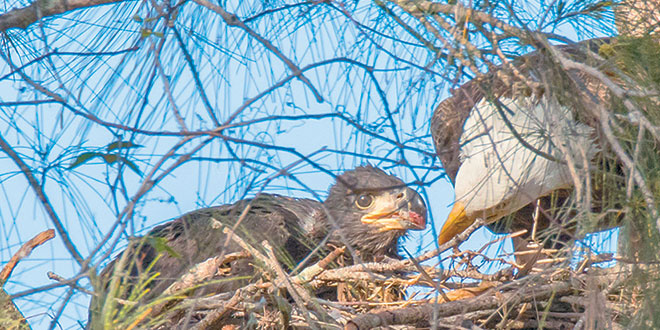 Submitted Photos. The young fledgling being fed in the nest.

This past February 21, the resident bald eagles, Paleo and Calusa, hatched an eaglet at the Marco Island Nature Preserve and Bird Sanctuary, formerly known as the Marco Eagle Sanctuary.

In a little over three months, this healthy eaglet rapidly grew to the size of the adult female eagle. Because female bald eagles are 25 percent larger than the males, it is speculated that this offspring is a female. 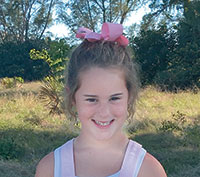 Peyton frequently visits the Preserve to see the fledgling she has named “Jamie.”

periphery of the Preserve. In the very near future, the fledgling will fly all around the Island and only return to the Preserve in the evening to rest. Peyton will have to visit Jamie later in the day during the summer.

The fledgling will remain in the Preserve with the adults for some time. Once it is proficient at fishing it will spend more time away from the Preserve. The adult bald eagles will remain in the back of the Preserve throughout the summer and begin the rebuilding of the nest around October 1 when nesting season begins. Next winter, Peyton can look forward to a new baby eagle friend, maybe two.

The property, now known as the Marco Island Nature Preserve and Bird Sanctuary, located at 665 Tigertail Court, has been purchased by the Marco Eagle Sanctuary Foundation from the Collier County School District under a five-year lease purchase agreement. The Marco Island Nature Preserve and Bird Sanctuary is the Foundation’s plan to preserve the site and develop a Nature Learning Center where the public can experience the natural habitat of pre-developed Marco Island while also preserving the species of birds, animal and flora native to this region.

To learn more about the Marco Island Nature Preserve and Bird Sanctuary or to contribute to this project, call 239-269-1754 or visit www.MarcoIslandNaturePreserve.org.