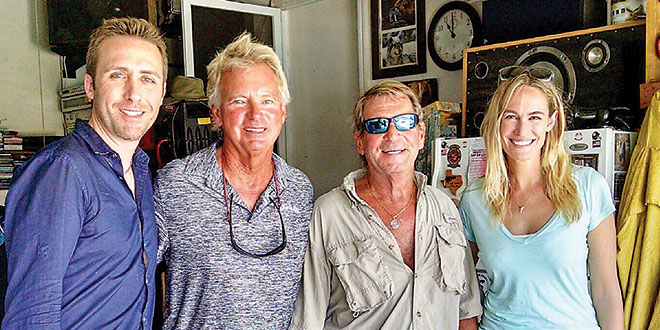 What do you get when you combine high-tech satellite positioning with a search for pirate treasure off the coast of Marco Island? How about a great book with heroes and villains and more twists than a winding staircase. “Lost And Found” is a fictional story by local author and captain, Tom Williams, that was published in 2008.

Satellite images have many practical applications by governments and businesses worldwide in biodiversity conservation, geology, oceanography, education, intelligence and even warfare. When you place this technology in a fictional setting with gold, deceit and a myriad of sultry characters the eventual outcome can only provide great entertainment.

Tom appeared on several radio and TV shows, such as NBC Today, the Daily Buzz and others, to talk about his successful book. The attention regarding a possibility of sunken treasures in South Florida was growing.

As a result of the nationally publicized work, Mr. Williams created a three-part story for a local newspaper titled “ The Lost Treasures of Cape Romano,” and it caught someone’s attention. Out of the blue, Tom received a call from Bob Asher, a producer for the Travel Channel. After a brief phone conversation Mr. Asher decided that he needed to come and meet Tom…all the way from Los Angeles.

The foundation of a new adventure was taking hold. From August 25th through 27th of this year, Asher brought in a camera and sound crew, as well as two hosts, for an upcoming pilot on the Travel Channel. The name of the series will be “Caribbean Gold,” and your guides throughout the journeys will be Philippe and Ashlan Cousteau. Philippe is the grandson of the great explorer and conservationist Jacques Cousteau.

Excluding any preplanning, in just three days the hosts and crew, under the guidance of Tom Williams, were able to film all of the footage necessary for the first episode of the series. Several area boats were used in the filming, as well as Tom’s pickup truck. Bob Asher said that the truck had “character” and had to be included. Scenes from some of our area beaches will be easily identified in

Submitted Photos Ashlan and Philippe Cousteau prepare for a shoot overlooking the Marco River at the Snook Inn.

the program as well.

“Caribbean Gold” host Philippe Cousteau is quite well known as an Emmy-nominated TV host, author and social entrepreneur who has established himself as a prominent leader in the environmental movement. Philippe’s inspiration? His grandfather, Jacques. His wife Ashlan has been right by his side during their adventures with “Shark Week,” “Awesome Planet,” “Going Green,” and “Expedition Sumatra.”

Producer Bob Asher is the son of Elizabeth Montgomery, of the TV show “Bewitched” fame, and some of the camera crew just returned from filming episodes of “Naked and Afraid.”

As for local author Tom Williams, his second book “Surrounded By Thunder” recently won the Gold Medal Florida Books Award. When he is not writing he enjoys his two passions: sailing and people.

A master captain for 31 years, Tom escorts guests along our local waters in an eight-meter long sailing vessel for the Marriott Hotel here on Marco Island. With just a handful of eager tourists on board he truly loves the reactions of people as they absorb the area information that he has to share.

So…are there really treasures to be found just off the Marco shoreline? You bet. Pieces of wood with metal hinges dating over 100 years old have been found in our waters. A fisherman reeling in his line here discovered that a single-shot musket was on the other end. Most impressively are the two cannons pulled up, one weighing 2,000 pounds and the other 6,000 pounds. These big guns came from the sister ship of the famed Atocha and they will be featured on the Travel Channel program.

“Caribbean Gold” is scheduled to air on the Travel Channel in early December. No official date has been released as of this writing. So keep your eye on the TV listings. Keep an eye on the water as well. You just might see Captain Tom Williams sailing by, entertaining a few more guests and spinning a yarn about lost treasure!

Bob is the owner of Stepping Stone Ecotours, providing walking tours in the Big Cypress Preserve. He is also a naturalist for the 10,000 Island Dolphin Survey team. Bob loves his wife very much!