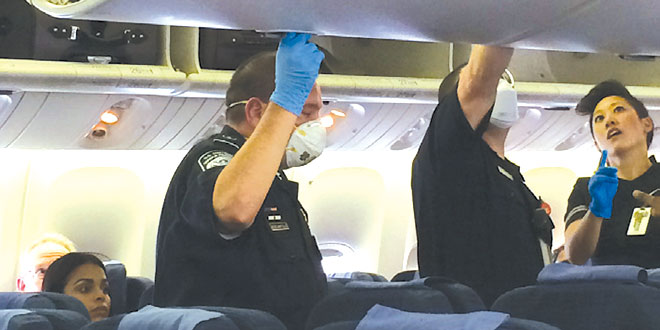 On a return trip from Brussels, just two weeks ago at this writing, popular area podiatrist Dr. Loan Lam was able to see first-hand how the policies and procedures of government agencies such as the CDC and TSA were enacted and enforced. Here is recap of her experience in her own words.

“As a physician and US citizen, I have to say I was highly disappointed in how the CDC, TSA, NJ Port Authority, and United Airlines handled our Brussels flight UA 998 Ebola scare. News coverage was wrong as well, reporting everything was clear four hours before we actually all got cleared. Here’s how we saw it happen…..

Brussels airport did a fairly awful job of screening the Liberians — about 10 or so — that boarded the plane. They asked about our electronics but nothing about how anyone was feeling or where we all had been before flying out of Brussels. Given that the Ebola patient in Dallas last week was on a United flight from Brussels, you’d think there’d be a high index of suspicion. One of the guys from Liberia was surprised he didn’t have to show his medical clearance that his doctor gave him to Brussels officials, especially since the Liberian government made him get a medical 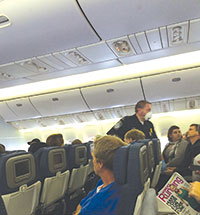 clearance before flying out. Brussels airport, by the way, is absolutely filthy.

The affected patient and his daughter began vomiting about an hour or so into the flight. They called for medical professionals to volunteer to help without having the appropriate isolation/hazmat gear to properly protect anyone. For another 6.5 hours, there was no communication or information. Surprised that we flew over London and Boston without stopping for the ‘medical emergency,’ instead, they left the patients on the flight without isolating or cleaning the bathroom used by the affected passengers. The flight attendants were obviously shaken, frantic and stressed. Isolation gear and hazmat suits arrived after we landed at Newark Liberty International (EWR). Flight staff during the flight instead decided to continue up and down the aisles serving food and drink — thanks for the additional spread of germs. I would have rather appreciated masks and antibacterial wipes instead.

We sat on the tarmac at EWR for about 1.5 hours before the police, ambulance, CDC and hazmat arrived. They originally were going to just quarantine the six rows of people around the affected patients and then let everyone else get off the plane. Half the people were through customs before the Secretary of Health decided to isolate everyone from the plane, so they made everyone on the flight come back through customs, and we sat for another hour like lepers 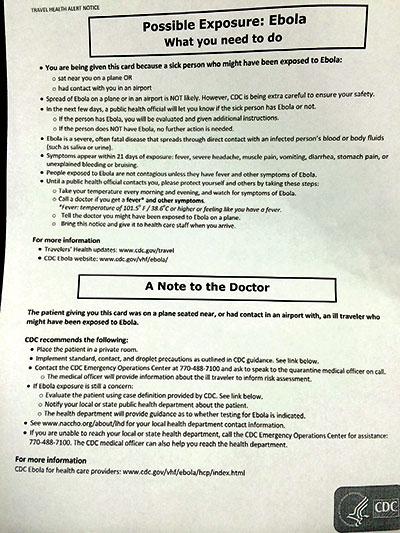 before CDC said it was clear.

They cleared everyone through customs, then decided that maybe it wasn’t a good idea so when we went to get our bags, the CDC rep and Port Authority decided to quarantine everyone again. Sat for another hour or so. They took an additional guy away for either questioning or examining. Cleared everyone again.

None of the agencies knew who was actually in charge, and it was a complete debacle with one agency deferring to another. Isolation precautions were lax at best. You’d think by now there’d be some sort of loose protocol in place given the multiple recent scares. Very disappointed in CDC, you have to step up and do a better job of protecting your citizens.

At no time during the ordeal were we (my husband and I) actually worried that we ourselves were exposed to Ebola since we had no physical contact with the affected man nor his daughter. We also refused food and drink after flight attendants offered them. We were extremely annoyed at the lack of order and protocol exhibited by all agencies involved. It truly felt as if they were all making it up as they went along and were very reactionary instead of proactive given the previous incidents. Our basic existing contact precaution measures to prevent Staph infections at our local hospitals were more rigorous than what was being followed at the airports to prevent Ebola.” 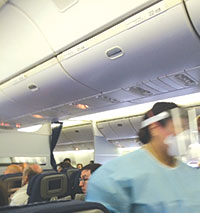 the Center for Disease Control (CDC) decided to set up a Rapid Response Team to send anywhere in the country when a hospital diagnoses a case of Ebola. Other stringent measures include health screenings for passengers at high traffic airports, like JFK, with four other airports initiating similar health screenings within the week. Still, the CDC says it is not possible to get the risk of spreading the disease to zero percent, even with these aggressive measures. Fortunately, it appears the CDC is increasing its efforts.

According to the Florida Joint Information Center for the State Emergency Response Team, the State Surgeon General sent a letter to the CDC stating the Florida Department of Health’s decision to redirect funds in order to strengthen Florida’s preparedness efforts related to the emerging Ebola threat:

This letter is to notify you of the Florida Department of Health’s action to redirect funds under the Notice of Award listed above, in order to strengthen Florida’s preparedness efforts related to the emerging Ebola threat.

The Department is immediately redirecting $250,000 of unobligated Hospital Preparedness Program (HPP) funds and $1 million of unobligated Public Health Emergency Preparedness (PHEP) funds. Further, the Department intends to redirect additional unobligated and carry forward funds from these grant programs ($1.8 million from HPP and $4.0 million from PHEP) for the purchase of additional Personal Protective Equipment (PPE) and to further enhance our readiness for Ebola and other emerging diseases.