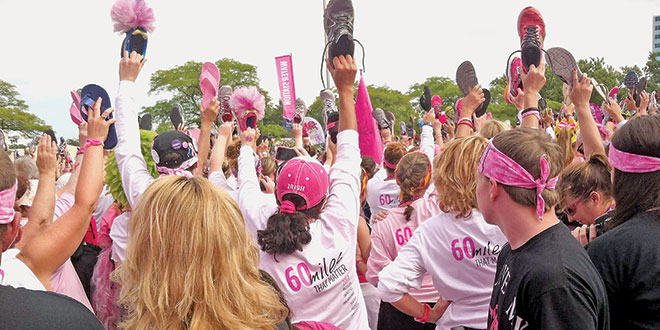 Ana holds up her shoe at the end of a previous walk.

On September 17th, husband and wife duo Ana and Cary Cramer set out to walk 20 miles on Marco Island. Decked out in bright pink shirts, necklaces and a backpack with images of Ana’s sister and her mother attached to it, their mission was clear: to raise money and awareness for breast cancer.

For the past four years Ana Cramer has participated in the Susan G. Komen three-day 60-mile Breast Cancer Walk. The event is a big deal for the Cramer family. Each year her husband and their two children Sidney, 11, and Matthew, 9, act as her main support system as she pushes through the many miles.

“The last four years Cary and the kids, they just went with me everywhere,” said Ana Cramer. “They cheered me on. They were right there with me throughout
the walk.”

This year however, she and her family weren’t able to make it to the official event that took place in Seattle, Washington. Though initially disappointed, Ana didn’t let that stop her from participating. She

Photo by Samantha HustedAna and Cary. On Ana’s backpack are images of her mother and her sister. Ana’s mother died from breast cancer, and her sister is currently in remission..

decided that if she couldn’t go to the walk she would bring the walk to her. And this time, Cary would be joining.

“Unfortunately this year we couldn’t go to Seattle,” said Ana Cramer. “So we said we’ll just do it here! This year is really special because he’s walking with me.”

Ana, like so many people, has personal ties to breast cancer. When she was just five-years-old she lost her mother to the disease. Her sister Virginia has also been diagnosed. Currently Virginia is in remission and is going through her last round of chemotherapy. For Ana, the 60-miles represents hope. With each step she pushes towards the day when breast cancer is a thing of the past.

In June the Cramer family moved from Chicago to Naples. They own a condo on Marco Island. They, like so many who came before them, vacationed on Marco and fell in love with it.

“We love Marco,” said Cary Cramer. “That makes it easier I think, being in a special place that means so much 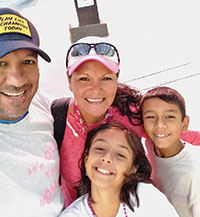 Submitted Photos Ana and Cary Cramer with their two children Sidney and Matthew.

The couple began their 60-mile journey in Naples, walking the 10 miles from their house to the Naples Pier and then back. Then on Saturday they made their way down to the Island. Starting on South Beach they did a big loop around
the Island.

“Last year when I practiced for my walk I did 20 miles on the Island,” said Ana Cramer. “So I kind of knew where to go. I love the beach so we got 5 miles in on the beach. That’s my favorite walk. I did it twice last year for training. I was so looking forward to this day.”

Then on Sunday it was back to Naples where they walked to Delnor-Wiggins Pass State Park and around North Naples. Though the journey was filled with cramped muscles and stiff calves, it was well worth it for the two.

“It’s overwhelming,” said Cary Cramer. “It’s hard first and foremost. It’s been really special though, to be able to do it with Ana.”