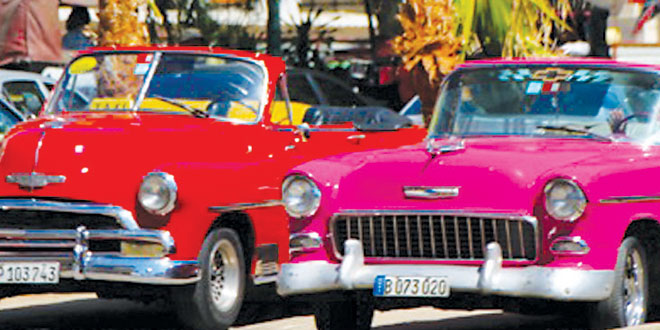 Classic American automobiles are a common sight in Havana.

The door to American travel to Cuba is opening wider, and locals Lana and Roger Withers are among the lucky few to walk through.

Lana grew up in Florida. She vividly recalls the days of the Cuban Missile Crisis, and the air raid drills experienced as a child in elementary school. Lana always had a curiosity about Cuba, and when her husband Roger’s 70th birthday approached it presented the perfect opportunity for the trip.

Lana’s breathtaking photographs give us a glimpse into this beautiful country, which for most Americans has been off-limits for over fifty years. President Obama recently announced his plans to resume 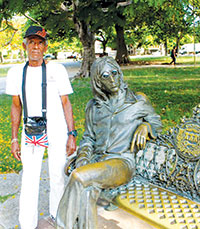 normal diplomatic relations with Cuba. Travel restrictions, although eased, are still in place.

The six day trip took the Withers to Havana, Cojimar and Callejon de Hamel. They were guided throughout the tour and presented with amazing photo opportunities each day.

In Havana the streets were lined with classic American cars from the ‘50s. Lana tells us that she didn’t see any vehicles dating after 1958.

Her Havana photos also show buildings lacking maintenance and upkeep; paint is seen peeling in large strips from the facades. Creature comforts were absent. People waited in line to use pay phones.

Despite hardships, the spirit of the people was strong. Lana describes the people she met as “open, friendly and kind.” Her pictures capture that spirit.

Little known is the fact that John 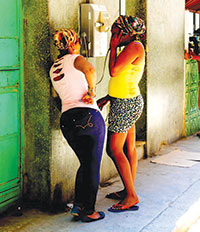 Lennon is revered in Cuba- so much so that he has a park named after him. Parque John Lennon, located in the Vedado district in Havana, is also home to a bronze statue of the former Beatles member. The statue, sculpted by Cuban artist José Villa Soberón, is guarded round the clock by Juan Gonzalez, in order to prevent people from stealing Lennon’s trademark glasses from the statue’s face. Juan, a retired farm worker, took it upon himself to guard the statue after hearing about the repeated theft of Lennon’s removable glasses.

Trees line the path to Hemingway’s house in Cuba.

which was filled with memorabilia and personal effects. The house was the site where Hemingway wrote both The Old Man and the Sea and For Whom the Bell Tolls. After Hemingway’s death in 1961, the Cuban government took ownership of the property and opened it to the public.

Lana took more than 700 photographs during her six day trip. She tells us that she wants to go back again. New rules make it easier for her to do that. Old rules required Americans travelling to Cuba justify their trip under one of twelve permissible categories, and sometimes required a license from the Treasury Department Office of Foreign Assets Control. New rules eliminate the need for licenses to certify the travel under a permitted category. Commercial flights to Cuba have already begun.