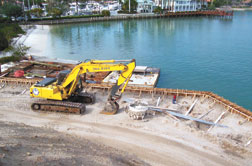 PHOTOS BY NATALIE STROM/COASTAL BREEZE NEWS – These photos show the work involved in building the new Jolly Bridge from the seawalls on up.

Every family-owned business comes with a unique story. Marco Marine Construction is certainly no different. The seawall and dock company was formed over thirty years ago and has steadily grown throughout its lengthy history. In its thirty-first year of business, the company celebrated a milestone when it was asked to be a part of the construction of the new S.S. Jolley Bridge.

The Ricci family moved from Albany, New York to Marco Island in 1973. At that time Marco Island was barely a dot on the map, but there were big plans in store. Don Ricci Sr. immediately began working for the Deltona Corporation; developing the intricate canal system that has made Marco what it is today.

After the canal system was finalized, Ricci Sr. continued in the industry working in foundation piling. He began his own company, Marco Marine Construction, in 1980.

Throughout the years the company grew to include work in seawall repair and replacement, dock building and has most recently started working in high-end docks.

It also grew by way of family. Ricci Sr.’s brother, Jim Schuck, and son, Donald “D.J.” Ricci are now the faces you will see in the office and on the job-site.

With thirty-one years of experience and 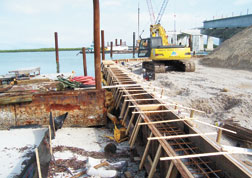 a family staff that has seawall construction in their veins, Marco Marine Construction was an easy choice for the Johnson Brothers Company. The Florida Department of Transportation (FDOT) hired Johnson Brothers as the head contractor for the $25 million project which was funded by the American Recovery and Reinvestment Act of 2009. The Johnson Brothers Company, based in Lithia, Florida, hand-picked all sub-contractors based on skill and practicality. Many companies hired were from outside of the Southwest Florida area. Marco Marine Construction was one of the few local companies to be involved.

“Because of the complexity of the project, it was important to choose a company that was close by. The construction of the seawall depends on other structures of the bridge. This meant a lot of idle time while working on the seawall.” explains D.J. Ricci. “Our portion of the project began in October of 2010 and wasn’t finished until May of 2011.”

Not only was the project time consuming but it was also much more work than constructing a regular seawall. “The seawall panels extend twenty-one feet long and are two-and-a-half feet wide, much larger than your average seawall,” adds D.J. There were also repairs to be made to the existing seawalls 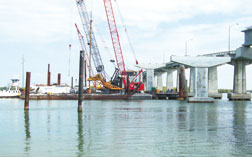 According to a letter from Michael Brown, Project Manager for Johnson Brothers, Marco Marine Construction was responsible for work, “including approximately 1,000LF (linear feet) of FDOT seawall, including all concrete sheet pile, tiebacks, deadmen, and seawall cap.”

Brown also went on to describe MMC’s work as “satisfactory, on time and met all the required specifications for the (Jolley Bridge) project including the FDOT Design Standards and Specifications.”

D.J. and Jim also found working with Johnson Brothers to be a breeze. “The work went a lot smoother than anticipated. Johnson Brothers was very organized and clear in their communication,” explains D.J.

Given such a large project, Marco Marine Construction was still able to complete the work using only four of their regular employees. They were even able to work on other jobs during this time.

The biggest overall challenge with working on such a large project? “Paperwork!” adds Jim Schuck. “Lots and lots of paperwork.”

It seems the family-owned company should expect to deal with much more paperwork in the future. They have, after all, been an integral part of shaping the face of Marco Island since the era of the Mackle Brothers.