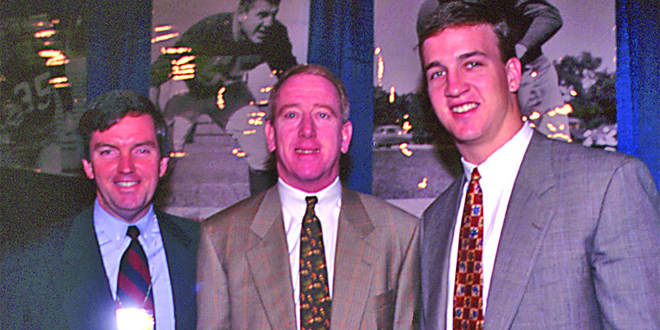 Twenty-four of Craig Kelley’s 29 seasons with the Indianapolis Colts were spent as the chief publicist for players and coaches, including 13 years for one of history’s finest players – Peyton Manning.

Kelley recently was inducted into Louisiana State University’s Manship School of Mass Communication Hall of Fame. A native of the state, Kelley graduated from LSU in 1982.

A career in professional football was a thrill for Kelley, who grew up attending New Orleans Saint games with his mother. But he always kept in mind that he was doing his job for the fans, not himself or the players and coaches he grew close with.

“They call sports the toy department (of life)…but it means a lot to people,” Kelley said. “As important as fans view sports, that’s how I viewed my job. I wanted to communicate with people as clearly as I could.”

Kelley, a Naples resident and Realtor with Premier Sotheby’s International Realty, used his front-row seat to co-author a book entitled, “Peyton Manning – A Quarterback for the Ages.”

Part of ML Meade’s Top Producing Team, Kelley will conduct a book signing on Sunday, November 13 from 1 to 4 PM at 3248 Tavolara in the Marsh Cove Village at Fiddler’s Creek.

“Craig Kelley and (Broncos historian) Jim Saccomano, two men who have seen his (Manning’s) professional career from a unique point of view, have captured the essence of Peyton Manning, both on and off the field,” said Dungy in the foreward.  “They have chronicled his journey in an amazing collection of photographs with behind-the-scenes stories. If a picture is worth a thousand words, this book will tell you millions of stories. It will be priceless to anyone who is a fan of Peyton Manning.”

Manning retired this past March as the NFL’s all-time passing leader in yards and touchdowns. He earned an unprecedented five NFL MVP awards and is only quarterback to lead two teams – Colts and Broncos – to Super Bowl titles.

Kelley discovered the Naples/Marco Island area in 1998. Buying a home the first day he and his wife arrived, Kelley has made this his adopted hometown. Both he and Manning are New Orleans natives, a connection that enhanced observations made in the book.

“Peyton is one of the most amazing people I ever met, and his relentless preparation and dedication to excellence was on a level I’ve never seen exceeded by anyone,” said Kelley. “People in our area are true sports fans and are appreciative of those driven to greatness. They will enjoy this compilation of photographs and insights into one of history’s finest achievers.”