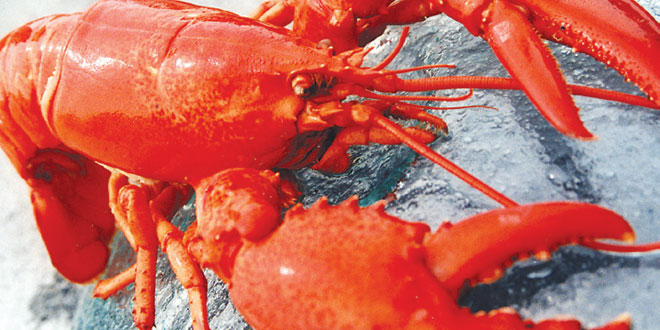 Take one look at a lobster and it’s obvious that they can’t swim too far! Lobsters do start out at the surface of the water, as they go through a planktonic stage prior to settling to the bottom. As the tiny lobsters grow, they eventually settle to the ocean bottom, where they prefer to hide in rocky caves and crevices. The largest American lobster was caught off of Nova Scotia, and weighed 44 pounds, 6 ounces and was 3 feet, 6 inches long. Most lobsters do not grow this big.

Recently, one of our servers was asked “do you have male or female lobsters?” Personally, I had not had that question, so research was done immediately, to get the answer. How do you tell the difference between a male and female lobster? Look under its tail. On the underside of its tail, a lobster has swimmerets, which are used to help the lobster swim and in mating. The male has a modified pair of swimmerets. I ask what is the difference in flavor? From what I’ve seen it seems that this is mostly a matter of personal opinion, and that neither male nor female lobster has a specifically different taste. The males have larger claws, while the females have a meatier tail and roe (which some consider a delicacy), so select your preference based on your favorite part of the crustacean. Love the claws? Buy male. Is the tail your favorite part? Buy female. The taste is the same. The only difference is some female lobsters sometime have eggs. When cooked the eggs turn red and are called “roe” which many people love to eat.

A lobster’s shell can’t grow, therefore as the lobster gets bigger and older, it molts and forms a new shell. Molting occurs about once a year in an adult lobster and is a vulnerable time in which the lobster retreats to a hiding spot and withdraws out of its shell. After molting the lobster’s body is very soft and it can take a few months for its shell to harden again. When fish markets advertise soft-shell lobsters, these are lobsters that have recently molted.

Serving lobster tails to your dinner guests or loved ones is always a special treat, so you want them to taste great! Be careful and buy the best product you can afford and buy from a reputable source. As lobster tails usually come flash frozen, you need to know which ones are the best to buy.

As a restaurateur, we serve Live Maine Lobster every Friday night, and offer warm water tails through the week…thus we offer both options.

More Facts: 1. Many people like the Tomalley however the Maine Lobster Promotion Council advises against eating it. This is the liver and pancreas of a lobster that can contain dioxins. If you find the liver is black put back in to cook for another five minutes to make sure the color is green. This assures the lobster is fully cooked.

2. Maine lobsters are trapped and harvested year-round however most are caught between June and late December when the lobsters are most active. In the colder months the lobsters do not move around as much and the catch is reduced during this period.

First consider the size of your pot for boiling the lobsters. An 8-quart pot will easily take one lobster, a 16-quart pot, 2 or 3 lobsters. If you are cooking a lot of lobsters you’ll either need to cook them in stages or have more than one pot of water boiling.

1. Fill a large pot 3/4 full of water. Add 2 Tbsp of salt for every quart of water. The water should be salty like sea water. Bring the water to a rapid boil.

2. Grasp the lobster by the body and lower it upside down and head first into the boiling water. Continue to add the live lobsters to the pot in this manner. Cover the pot.

Note that larger lobsters will turn bright red before they are completely finished cooking, so you do want to time the cooking, and not just go on color alone. Translucent undercooked lobster meat really doesn’t taste good. It needs to be opaque through and through. If you cook it too long, the meat will get rubbery, so keep an eye on the time.

4. Remove the lobsters from the pot with tongs and place on a plate to drain and cool.

Mini Lobster Season in Florida, begins soon…get down to the Keys! Enjoy this wonderful taste treat!