Livvy Gets Some Wheels! 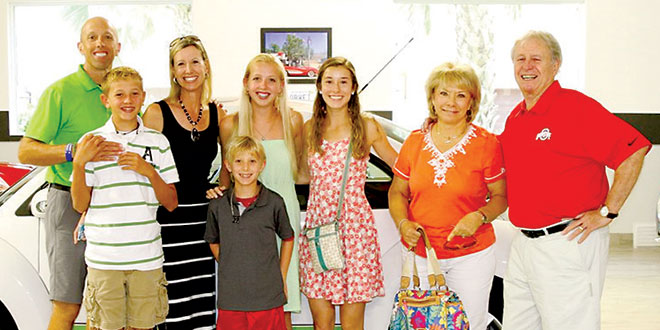 Jane Watt is known to many of us on the island as the founder and chairperson of Marco Island Academy on San Marco Road. She is likely to be sighted anywhere on the island. She attends unending meetings with supporters of MIA and has managed to author a book that was endorsed by Jeb Bush and Michelle Rhee called “Fighting for Kids” about how MIA came to be.

Jane is ubiquitous and peripatetic. These adjectives must have been invented for her. Jane’s husband, Jim Watt, is the volunteer coach of the MIA girls’ soccer team. He coaches three other club soccer teams for his kids as well. Jim is the sales manager for a family company that sells specialty lumber products for packaging to manufacturers across the nation. His company is headquartered in Ohio, but he works out of a small office on Marco. When he is not on the soccer field or with his family, he is traveling across the U.S. on frequent business trips.

Jane and Jim are the proud parents of three children, Olivia, 15, Jonathan 12, and Jacob, 8. Their three children attend Marco Island Academy, Marco Island Charter Middle School and Tommie Barfield Elementary, respectively. As many families can attest, having multiple children in multiple activities requires significant juggling. When Jim is in town, the couple will divide and conquer to get all the kids to their extracurricular activities.

No matter whom Jane was meeting with or what she was doing, at 3 in the afternoon, she dropped everything to pick Olivia (“Livvy”) up at school. MIA is on the southeastern fringe

The moment of surprise when Livvy sees her new car. PHOTOS BY KAREN YOUNG

of Marco Island. Olivia had no other way to get to cross country, track, soccer practice, or to even get home for that matter.

Everything changed for her on Sunday, July 19th when Olivia celebrated her “Sweet Sixteen” about six weeks early. Her actual sixteenth birthday is on September 4th (also Jim’s birthday). Although John and Mary Lou Watt, Olivia’s grandparents, will be in Ohio for her birthday, they wanted to surprise her with a very special gift while they were here. It was a perfect weekend, because Olivia’s cousin and close friend, Payton Watt was visiting from Michigan. Grandma and Grandpa Watt had given Payton a car when she turned sixteen as well. She was thrilled to be in town for Olivia’s big day.

Bill and Karen Young are close friends of the Watts. Throughout the years, they have been generous benefactors to Marco Island Academy. In fact, the “Bill and Karen Young Administrative Wing” was named in their honor a couple of years ago. Bill is an avid car collector on the island. He is partial to Ferraris and Porsches. He has 17 cars in his collection and stores them in a special garage house near his residence.

Bill also has a soft spot for Olivia Watt. It must be quite a large soft spot. Bill spent the past four weeks helping to look for, and then negotiating for, a used VW Beetle – Olivia’s favorite car. He helped find it online. Then Jim and he travelled to Hollywood, FL to negotiate the price and drive the car back to Marco Island. John and Mary Lou Watt,

Jim’s parents, paid for the car and flew in for the celebration. Bill Young put the Beetle in with the rest of his cars and personally made necessary repairs to it. He went over the car with a fine-toothed comb, and by the time the gift was given, it looked brand new. Knowing that Olivia’s favorite color is lime green, Young added a racing stripe of this color, as his gift to Olivia. He wanted to make sure the car was unique to her personality.

On Sunday, July 19, the Watts told their kids that they were all going over to the Youngs’ place to see Bill’s car collection. None of the kids knew what awaited there. Jonathan and Jacob found out only ten minutes before the unveiling. Karen Young, Bill’s wife and a talented photographer, recorded the whole event on camera. The results are an intimate look at an endearing moment in the life of the island’s most prominent and well-liked families.

“Olivia’s Sweet Sixteen is the finest hour. We are so proud of the beautiful young lady she has become. We hope she enjoys her new used beetle,” said Grandparents John and Mary Lou Watt. When recounting the day’s events, Livvy explained, “I was in complete and utter disbelief. All this time I have been trying to save up money in hopes that I could buy my dad’s 2008 minivan. To say I was surprised when I saw the car would be an understatement. I am so excited and still can’t believe it is true. I am very thankful for such wonderful grandparents and endless support from family and friends.”