Live Entertainment at La Tavola – Michael D’Amore and so much more! 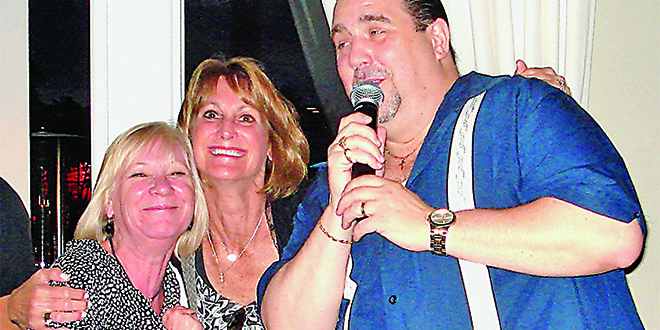 La Tavola Restaurant and Bar, located at 961 Winterberry Drive, is well known for fine food in an atmosphere of casual elegance. But did you know that they offer live entertainment six nights a week in the lounge? On Mondays and Saturdays, you can hear the magical sounds of Greg Miller’s Motown. Check out Tuesdays for a night of dancing to the upbeat sounds of Marco Island’s beloved Rosetta Stone, followed by Wednesdays with the N2L Trio. Rashae will be performing for limited engagements on Thursdays, March 23 and 30th. Fridays are the nights to do it your way with DJ Frank and the Rat Pack.

My husband and I happened to stop by on a Thursday evening for a bite to eat and some great music by singer Michael D’Amore. We were more than glad that we did!

As we settled into a cozy corner of the lounge, we were delighted with the available items on the menu. A vast selection included a bar menu with appetizers, soups, salads and alternative choices of small, medium and full size plates; just perfect for any appetite. The small plate crab cake hit the spot for me, while my husband thoroughly enjoyed the succulent bison burger. Throughout our meal, our friendly server, Margaret, was attentive, yet not intrusive; just the way we like it!

Then it was time for the music to begin. We were literally blown away by the talent of Michael D’Amore. With that description, I have precisely chosen my words. Michael’s voice is so powerful I could literally feel its percussion vibrating in my chest; its resonance gripping my heart with emotion. As he performs, one gets the impression that the microphone is part of his body. He becomes one with its electricity, as if he was born with it.

Michael was born in Mt. Kisco, New York, but as a long time resident of the Garden State, has always considered himself a Jersey Boy. His rendition of Frankie Valli’s “Can’t Take My Eyes Off You” gave validation to that!

Michael is the lead singer of the Capri’s who are known for their doo wop hits, “There’s a Moon Out Tonight” and “Morse Code of Love.” His one-man act, as performed at La Tavola, treats the audience to many genres and styles. Michael told the audience “The hardest part of a one-man show is singing the duets.” With a voice that ranges several octaves, his performance of “Unforgettable” invoked the sound of the remastered duet by the late Nat King Cole and daughter Natalie. His playful version of Jimmy Buffett’s Margaritaville gave comment to the lyrics, “Don’t know the reason. Stayed here all season.” He interjected in joking narrative, “I know the reason. I don’t like snow!” Michael’s delivery of Louis Armstrong’s “What a Wonderful World” brought his voice to a tone that I had thought was solely possessed by the great Satchmo. His renditions of other tunes originally sung by the Righteous Brothers, Elvis, Smokey Robinson and the Drifters brought back fond memories of younger days for many in the audience. Michael has said that he likes to measure his success by the number of smiles in his audience. That being said, he is at the top of his game!

Perhaps the most touching of his renditions were those of songs made famous by Andrea Bocelli. Michael’s rendering of “Con Te Partiro” was positively breathtaking. His voice took on a force of magic all its own. Then it was time for that magical voice to perform another duet. “The Prayer,” as sung by Bocelli and Celine Dion, has become Michael’s signature song. With his wide range in octaves, he performed the song as a solo duet, a feat of accomplishment that is truly amazing. His voice itself became a prayer. One could not help but feel that surely, we were witnessing a talent that is a gift from the Divine.

The written word cannot describe the magnitude of Michael D’Amore’s gift. You must experience it yourself. You must not only hear his voice, but feel it with all your senses. Michael will be performing at La Tavola on April 6, 13, 20 and 27. Be sure to mark your calendar for those dates. To learn more, please visit www.michaeldamore.com.

In addition to their six nights of live entertainment, La Tavola is now serving Sunday brunch from 10 AM to 2 PM and Sunday Happy Hour from 2 to 6 PM. Reservations are welcomed. Be sure to stop by to meet the owners, long time Marco restaurateurs, Guy and Lisa Verdi and their wonderful staff. To check out their fabulous menu, please visit www.latavolarestaurantandbar.com or call 239-393-4960.