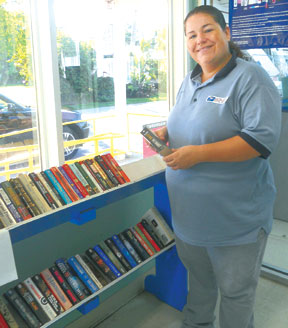 It’s tiny, it’s old, it’s really used and it’s full of art. Everyone loves it even though there’s no parking. Most would say who needs parking when you can walk to it? Some would say it has become a destination – maybe it should even be on the Historic Register. There’s a well tended garden out front complete with orchids and there are two very nice people inside ready to help you. There’s also a big sign out front displaying the numbers 34140. Surely you know by now I am talking about something that means a lot to us Goodlanders —our Post Office.

What prompted my interest in the meaning of this special place to Goodlanders is that the hours here are more than likely going to be shortened. Actually, the head postmaster from the Naples area probably will have made his decision 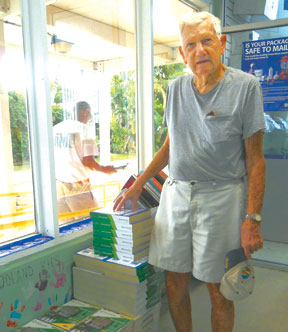 Catfish with the phone books.

on this matter by the time you read this. But I wanted to know how people feel about shortened hours. Will this be a problem to anyone?

One day I pretended to be a roving reporter and stood outside the Post Office to see what I could find out. Soon, I met a guy nicknamed Catfish and helped him get his phone book. You see, our Post Office is the center of all things printed. All the phone books for Goodland had been delivered to the Post Office and on that particular day, were all wrapped up in a plastic covering that was difficult to open. So I helped Catfish get his unwrapped. Now I have a new friend and so does he.

Later, I saw Jay McMillen arrive in his golf cart to pick up his mail. So I interrupted him, took his picture 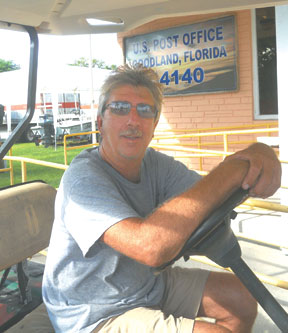 Jay McMillen getting his mail.

and asked him what this little Post Office means to him. Without any hesitation, he said, “This is the center of our community, where we visit, catch up on news – the perfect place to meet and greet.”

You can tell by the picture of the boxes that they are very old. After all, our first postmaster was the late Kappy Kirk and our more recent one, Judith Pritchard, retired a few months ago. Judith is responsible for encouraging Goodland artists to create a painting in sections around the boxes for all to enjoy. Judith herself did some painting inside the office and outside of the building itself.

One part of the Post Office which I love is our “library”. Really, it is called the Goodland Book Exchange, but residents donate and borrow books as they please. It works very well and Shannon Mitchell, our 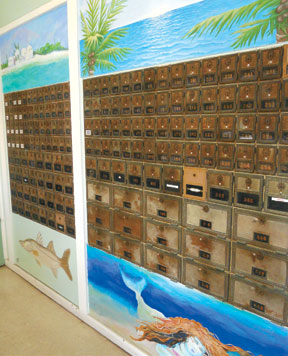 new Officer in Charge mentioned to me. “Yesterday there were so many books here and now many of them have been borrowed for a time.” We both know there will be more books coming as season unfolds.

You see, we have a great deal of personality and character connected to our Post Office. It is the cherished hub of activity and friendship in our little village.

I have learned from my day of “roving reporting” that shorter hours will be okay. All the little things that make our Post Office the hub of Goodland will still exist as long as the Post Office exists. We want to keep it open for years to come to provide the best postal services anywhere for the best little village anywhere.

Joanie Fuller is the President of the Goodland Civic Association. She and her husband of 48 years of marriage, David Fuller, are residents of Goodland.