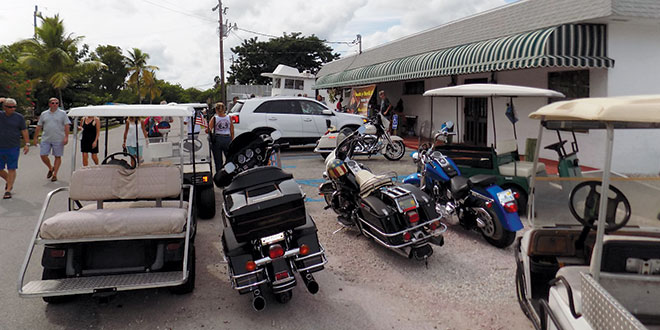 Merrill’s friends use five different modes of transportation to the Little Bar. PHOTOS BY BARRY GWINN

Niki Bauer and her brother, Ray Bozicnik, have been the owners and operators of the Little Bar in Goodland for over 25 years. In general, Ray looks after the food end of the business, while Niki oversees the front of the house. Among Niki’s responsibilities is the booking of musicians, for the entertainment of the Little Bar patrons. Over the years she has developed a core of performers, which consistently delight her customers with some of the best blues music in Southwest Florida. I can personally attest to this.

A 34-year-old blond haired, blue-eyed Goodland blues singer, who she first booked in 1993, became one of her favorites. She liked him so much that he became a regular, appearing every Sunday night, accompanied only by his guitar. “The crowd loved him,” said Bauer, “he could play and sing almost any song they requested. You could see how he connected with his audience.”

Merrill is the product of a musical family. His dad was a singer and played guitar. “Our dad 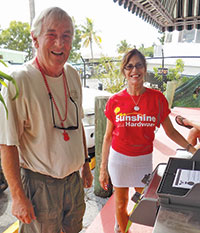 could pick up any instrument and play it,” said Jim Allen, Merrill’s brother, also a musician of note here in Goodland, “he played with various groups and performed at local clubs in Minnesota.” Jim Allen is also a regular performer at the Little Bar, having gotten his start at the age of 16, at a supper club where his mother was working. Jim is 12 years older than Merrill, and grew up in Minnesota, where he still spends his summers.

Merrill grew up in Portage, Wisconsin, a few miles north of Madison. He sang in the high school choir and, according to Jim Allen, had a bent for the theater. Merrill had various roles in school plays, finally, in 1976, playing Finian McLonergan in his high school’s production of the musical, “Finian’s Rainbow.” It was in 1966, however, that Jim gave Merrill what may have been the best advice Merrill ever got. The U.S. Army had ordered Jim to Vietnam. He was disposing of his personal effects and he wanted Merrill, then 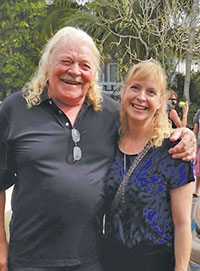 only 8 years old, to have his guitar. As he handed his guitar to Merrill, Jim made an offhanded remark. “Here, learn to play this. The girls will love you,” Jim told him. The rest is history.

On September 7, Merrill Allen was badly burned when a propane gas stove exploded on his boat. He was airlifted to the Burn Center’s I.C.U. at Tampa General Hospital, where he remained until returning home three weeks ago. Within hours of learning of this tragedy, The Little Bar announced a fundraiser to be held on Sunday October 11. “Ray and I were devastated to hear of Merrill’s accident,” Niki said, “We agreed to hold a fundraiser for Merrill as soon as we could get the restaurant up and running.” Shortly after this, the Little Bar was swarming with artisans and staff furiously reviving the restaurant from its long summer slumber. “Niki wanted to chair the fundraiser,” Ray told me, “I knew she could do it. I just tried to stay out of her way.” Bauer 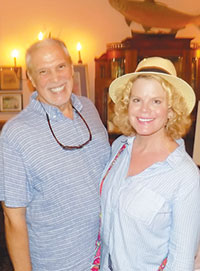 Donald and Liz Pecora at the silent auction.

jumped right in and never looked back. “I really didn’t know what to expect,” Bauer said, “this was our first fundraiser. We had participated in community fundraisers before, but had never hosted one. I expected strong support from the Goodland community, but was overwhelmed with the massive response from the entire region.”

The Merrill Fest, as Niki called it, was held from 12:00 PM to 10:00 PM on Sunday, October 11. Two days later, Niki reported that the event had raised over $20,000, with checks still coming in. When I talked to her the day after the event, Niki was exhausted, but never the less, radiant and exhilarated from what had just happened. I asked her how it felt to raise so much money for Merrill. “Tears of joy with the overwhelming generosity of our community,” she replied. She said that she was twice moved to tears while the event was underway. “There were so many people, it looked like the Mullet Festival at Stan’s,” Niki said, “I couldn’t have done this 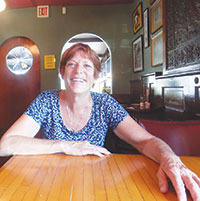 without the help of the Little Bar’s staff, family and friends. I would like to thank each and everyone, local merchants, patrons, doctors, dentists, veterinarians, friends, family, Merrill fans, from Goodland to Bonita for the making the MERRILL FEST such a huge success.” Bauer deflects a lot of the credit, but seemed to be everywhere at once while the fundraiser was going on.

Bauer estimates that about 300 people and merchants contributed to the success of the fundraiser. A tremendous amount of raffle prizes and gift certificates were donated. “We were running them over to the other Goodland restaurants, every hour, 15 at a time, to be raffled off,” Niki said, “The restaurants were encouraging their patrons to visit us.” In addition to conducting three different raffles in the restaurant, providing top flight musical entertainment in the bar (six bands from 12 to closing), the Little Bar was hosting an impressive silent auction in the Papa Ray Room, featuring numerous donated works by local and area artists. The silent auction brought in $6,800. 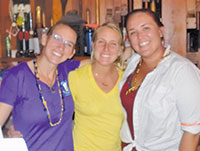 of the Goodland residents uniformly evinced a desire to support one of their own, who also happened to be a valued and beloved member of the community. Gary “Shorty” Foltz, a local fisherman, is always good for a comment about Goodland. “Goodland takes care of its own,” Shorty said, “We scrabble sometimes, but when push comes to shove, we’re all in.” Ace Hardware donated a $300 Weber gas grill. Susan Babbitt, an 11-year resident, was running the raffle. “Merrill needs our help,” she explained, “He is one of ours. This is a community that pulls together.”

Donald Pecora is president of Goodland’s largest condominium association, and an avid supporter of the community. It is telling that he and his wife, Liz, interrupted his recuperation from a double heart bypass to attend the fundraiser. “Merrill is an awesome musician, and a staple of the community,” Donald told me, “He is someone who we like to have as part of Goodland. Whenever there is a community event, we can count on Merrill and his 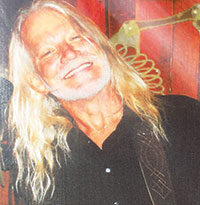 brother Jim to volunteer as entertainers.”

There were plenty of people present from Marco Island and the mainland. Scott Kellett, a prominent Naples banker, brought over four of his friends for the Merrill Fest. Kellett fell in love with Goodland after buying a waterfront retreat here five years ago. “Merrill is a very talented musician,” Kellett said, “He is a great person and a friend. We had to support him.”

About four days before the accident I ran in to Merrill at Publix. We were both doing some shopping. I found that we had something very much in common. All either of us wanted to talk about was how much we loved Goodland and how lucky we were to be able to live there. Upon parting, I reflected on what an unusually warm and delightful person I had just spoken to.