Lily to the Rescue 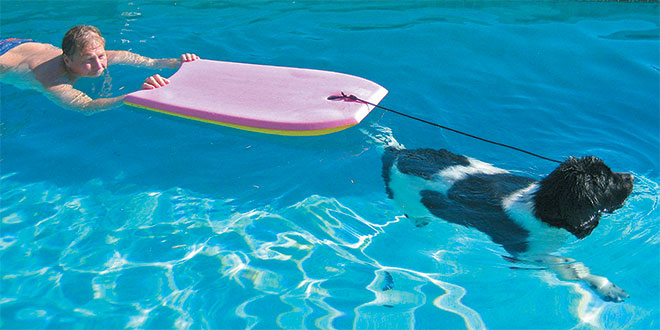 Don’t be surprised if you see a magnificent black and white Newfoundland in a custom life jacket prancing about on Marco Island. Lily is doing her job to encourage community-wide participation in the Marco Island Sail and Power Squadron’s Wear It Campaign. She is, after all, the Power Squadron’s mascot.

How can attending the Wear It event in your life jacket save lives?

The North American Safe Boating Campaign continues to have positive impact on boater behavior. An annual survey of recreational boaters conducted by Paul Worth and Associates, on behalf of the National Safe Boating Council, found that:

Boaters in locations with high campaign activity actively wear their life jackets “always or most of the time with a 90 percent confidence level.”

Boaters who are aware of the Wear It Campaign and recognize its logo come from high campaign activity locations.

This is important because the 2014 U.S. Coast Guard data on boating accidents lists drowning as the cause of death in over 75% of the 610 fatalities that year. Further, 84% of people who

drowned in boating accidents were not wearing life jackets. So, showing up to spread awareness of the Wear It Campaign may have very positive impact on your friends and neighbors, and help save lives.

Join your friends and neighbors at Rose Marina on May 21st at 9 AM to help make all boaters aware that they need to wear their life jackets. Last year Marco Island’s event had the largest number of participants in the State of Florida, and the goal this year is to do even better!