Lights Out and Watch Your Step on the Beach! 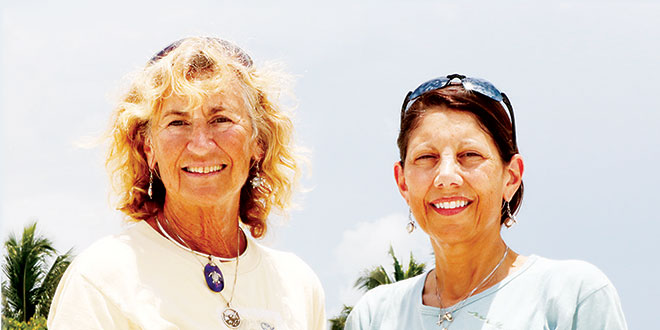 It’s nesting time in the Marco area, but don’t look up. These nests are under the white sands of our beaches and belong to Caretta caretta, fondly known as our Loggerhead Sea Turtles.

Last issue, Coastal Breeze reported on the record-setting 101st nest. Now we have come to learn there are 114 nests. The previous record was 93 a few years ago. While this type of achievement merits some type of award, most sea turtles don’t have a mantle upon which to display a trophy. But we do have a couple people that deserve our most humble thanks.

Mary Nelson and Beverly Ann Shipe have been patrolling our beaches for over 20 years. Thanks to their passionate interest and concern, we know a lot about our sea turtle activities, along with a few ways we can co-exist with our oceanic brethren during their time on the beach.

“Sea turtles return to their natal site to lay their eggs,” says Mary Nelson. “That means that the turtles now laying their eggs were hatched on these beaches about 15-20 years ago. It’s a healthy sign to see so many nests this year, and there are probably a number of reasons including natural cycles, mating maturity of previous hatching and more responsible care of the nesting activities by beach goers.”

Officially hired by Collier County in 1995, Mary monitors, records activity and helps protect each nest to minimize the impact of human beach activity. She loves doing it and she’s very good at her job.

There is a lot of information about sea turtles and it makes for great rainy-afternoon reading from many sources online. Yet, Caretta caretta is a mysterious creature and there is much yet to learn.

Early on, they tried a tagging program on the hatchlings, but the tags would come off and proved an ineffective way to monitor the turtles from such a young age.

Accompanying Mary for the last couple decades has been volunteer Beverly Ann Shipe. Both Mary and Beverly Ann were happy to let me know that Beverly Ann has recently gained official status and is now a seasonal employee of Collier County. Her official title is Collier County Parks and Recreation Assistant/Environmental Technician. She much prefers Sea Turtle Monitor.

“Thinking of the early ‘90s when my husband and I first started vacationing in Marco in the summer- everyone said I was crazy to come to Florida in the summer,” says 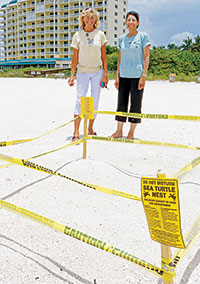 For over 20 years, Mary Nelson (left) and Beverly Ann Shipe have monitored sea turtle nests and activities on the beaches of Collier County. They are standing next to a nest on popular South Beach of Marco. With a little help, sea turtles and people can share the local beaches. And that’s pretty cool.

Beverly Ann. “But it was the only time I had off from work. We found the quiet of the island and peacefulness a treasure as we walked and ran the beach at daybreak, and enjoyed in other leisure pastimes. As I passed crawls and their resulted nests on the beach – one after another – it was natural to become more involved in protecting this species and volunteered in any aspect of sea turtle conservation efforts available.”

Why lights out? Good question. “One of the ways sea turtles, after hatching, find their way to the water – is light,” says Mary. “They crawl over the sand towards a light source, which is the stars, moonlight and horizon glow over the water. Artificial light sources confuse them and they end up going the wrong way. It’s not good.”

There are many other obstacles that make it difficult for the sea turtles. An increase in auto traffic on the beach packs the sand, making it difficult to dig a proper nest. The route to the beach can be impeded with litter or other man-made debris. Humans digging or walking on a nest can break the eggs. The list is long.

Says Mary smiling, “I remember an occasion where I saw a mother using the roped-off nest area as a playpen for her baby. It was a funny sight, but she complied when I reminded her it was unlawful. Guess we should add that activity to the signs posted by each nest.”

As members of this vast ecosystem known as Earth, we do have a responsibility to live in harmony with our non-human neighbors. Sharing the beach is one of them.

“As you hear from many people now, the ‘secret’ is out and Marco is no longer a quiet respite in the summer, but shares its beauty with many more vacationers than ever in the past during this ‘off’ season.” Says Beverly Ann. “However, the Caretta caretta sea life returns year after year still dependent on our collective community effort to protect her nests and care for her young. As we know, only one out of 1,000 will survive to adulthood.”

While Mary Nelson holds iconic status as The Turtle Lady, the job has become larger than one person. I predict an image showing the Dynamic Duo of Mary and Beverly Ann will someday be seen on t-shirts worn by teen Loggerheads all over the world. It would be a fitting homage.