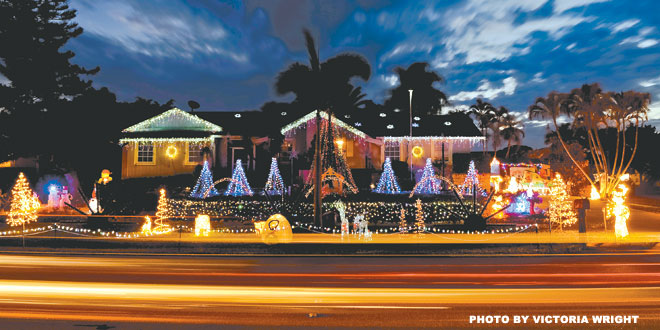 We’ve been called the Griswold’s like it’s a bad thing!” Tim Smither of 548 North Barfield laughs as he shares the many comical stories that have developed due to his family’s extensive Christmas decorations over the years. Anything but hard to miss, the house at 548 North Barfield has become a tradition to visit by many and somewhat of an obsession for Tim and his mother’s significant other, Jerry Haas.

“When I first met them, they did an enormous Christmas decoration. It was amazing. But everything was still,” explains Jerry. “That went on for a few years and then I went crazy and got a ‘Mr. Christmas’ that plays music and you can plug six different items into it. We actually decided we didn’t like that quite enough, hence our new system was born and the craziness began.”

In 2008, the men tried out the “new system” which consisted of an extra breaker box being added to the home to support light controllers, computers, DJ equipment and the lights, of course. As a hobby, Tim has learned how to use the above equipment to time not only when the lights go on, but also the lights’ speed and brightness. He can control what every strand of light is doing down to the tenth of a second. This is how he syncs the lights to music that plays at the house while the lights are on. “I figured it takes me four to five hours to do about 30 seconds of the music,” adds Tim. 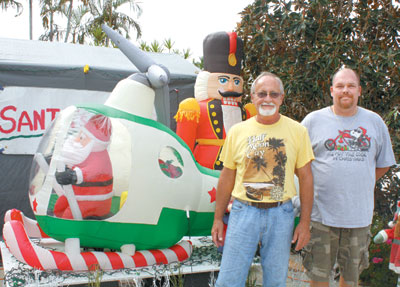 lights and decorations have grown over the years, so have the men’s abilities and imaginations. “We come up with new ideas throughout the whole year, then I have to figure out how to make it happen,” explains Jerry. With more decorations, comes more tweaking to the music and more movements of characters and flashes of light.

“We’ve tried some crazy stuff,” states Jerry. One year, the men used a crane to put a star at the top of their tree. The star and the lights were too heavy, causing the tree to lean forward and the crane got stuck in the yard! Malfunctions such as this don’t seem to deter them, after all, “something blows every night,” according to Tim. The men are often seen out front working to bring lights back to life as cars line along the street to watch the display. “There’s so much to look at that people don’t usually notice even when some of the lights aren’t on, but we know.” With upwards of 7,000 extension cords, it can take some time to fix the lights, even if no one seems to notice.

The men don’t joke around when it comes to the security of their light show. Having been robbed of $900 worth of decorations and equipment in the past, the men had cameras installed around the entire perimeter of the house. This way, if any Grinch does come along to ruin their Holiday cheer, it won’t be long before they pay for their crime.

“In the beginning, for me, nothing had sentimental value, but all of it does now,” states Jerry. The labor of love meant even more this year as his three-year old grandson, Ethan, was able to see the lights for the first time. Ethan was diagnosed Langerhans cell histiocytosis and required extensive surgery right around Christmastime last year to remove the non-cancerous tumor which developed over his left eye, a common result of the disease. “They needed a big team to do the surgery. He required 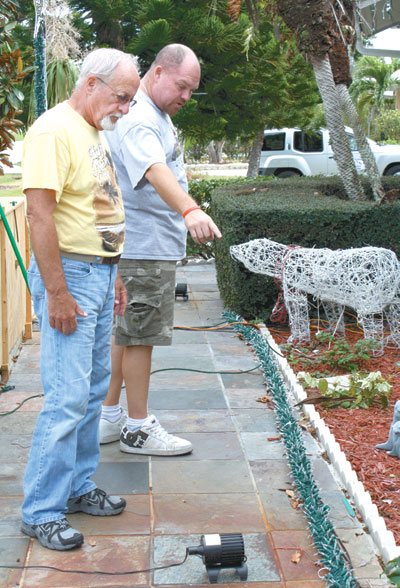 “If you saw what that child looked like on December 22 of last year, and then saw him 101 days later, running one mile of a five mile run for cancer, it was just a miracle. He actually ran it. He was in a buggy, but he said, ‘dad, I want to run.’” Ethan’s surgery and treatment has been so successful that he, “was just given the green light last week.” That same week, he visited his Grandpa Jerry on Marco Island and had a chance to see the lights.

“He’s had such an amazing recovery, he’s actually the poster boy for the gift-giving season for Tampa General Hospital,” adds Jerry.

In the midst of all this, Jerry and Tim still put on their light show. As Jerry explains, “We do enjoy it. We walk out to cheers and applause when the lights are on at night. We get notes in the mailbox and people even drop off decorations and lights. People are really happy and thankful that we do this.”

“We’ve always talked about putting out a donation box for the Wish Come True Foundation as a way for people to give back. We chose it because I had a friend from Rhode Island who had a child with juvenile leukemia. They helped her and she was 12 at the time. So far things are going well for her. In fact, she’s about to have a baby,” states Tim. “But we’ve never quite figured out how to do something like that because of traffic and security reasons.”

This year, more than ever, Tim, Jerry and Linda hope that those who feel the urge to give back, do so by gifting the Wish Come True Foundation. Any donations may be sent to Wish Come True, Inc. at 1010 Warwick Avenue, Warwick, RI 02888. To learn more, visit www.awish. org. After you’ve finished sending out your donation, visit 548 N. Barfield on Marco for a fantastic show: weekdays 6:00 – 10:00 PM and weekends 6:00 – 11:00 PM.