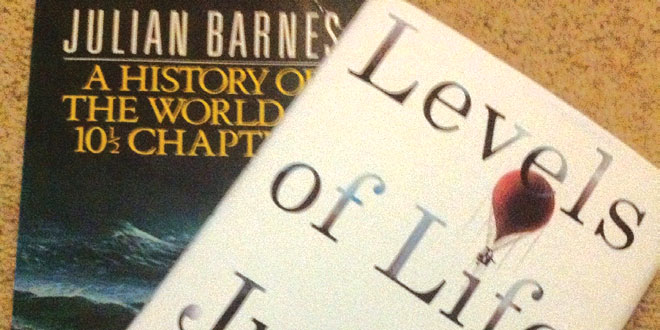 In this slender book, Julian Barnes writes three sections/essays: “The Sin of Height,” “On the Level” and “The Loss of Depth.” He begins, “You put together two things that have not been put together before. And the world is changed.” Those two things are invariably eventually torn apart, and hence, the ups and downs, or levels, of life.

“The Sin of Height” tells the story of Felix Tournachon, a mid-19th-century French photographer who was celebrated for his portrait photographs which were unique due to his use of lighting as well as his talent to chat his subjects into utter relaxation. Nadar, as he came to be known, also ventured into the Paris Catacombs and photographed fully clothed mannequins he positioned among the ancient skeletal remains. Barnes includes his story because Nadar was the first to bring together photography and ballooning, the first to take aerial photographs. At that time, ballooning was not new, but still unusual and only “progressives” participated in it. It represented freedom, so many “balloonatics” enjoyed it strictly for the entertainment value. However, Nadar was intrigued by the possibilities of using balloons and aerial photos for land surveying, military reconnaissance and postal service, as well as artistry.

Nadar was married to the same woman, Ernestine, for 55 years until her death in 1909. He followed less than a year later. He was an “uxorious man,” had helped nurse his wife after she suffered a stroke, moved her to the country for quiet and clean air, and had been closely attentive to her throughout their life together. This uxorious trait is important to Barnes, as he will articulate in “The Loss of Depth.”

The middle essay “On the Level” is a fictionalized relationship between the great actress of that day, Sarah Bernhardt, and a British colonel, Fred Burnaby. “You put together two things that have not been put together before; and sometimes it works, sometimes it doesn’t.” Yes, it didn’t work out for Sarah and Fred. Both were balloonatics, and both knew Nadar. Fred had ballooned with him, and Sarah was photographed by Nadar. It is a fact that they all knew each other. Barnes has Fred, a member of the inner circle of the Prince of Wales, falling in love with Sarah after he is convinced she is “on the level.” The actress is committed to freedom, and when he gets to the point of asking her to make their togetherness permanent, she reiterates her stand against marriage. To underscore her refusal of his proposal, she invites him to her dressing room the next evening so he will understand. When he appears, 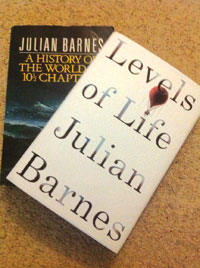 she is with her usual retinue plus has linked her arm to another man, locks eyes with Burnaby, then looks away. Dismissed, Colonel!

Factually, both Sarah and Fred do marry later. Sarah’s marriage was a complete disaster. Fred’s wife became ill within a year of their marriage, gave birth to a son and spent many future years in a Swiss sanatorium. Fred busied himself ballooning, writing and eventually was killed by a spear thrust to the neck at the Battle of Abu Klea, Sudan, in 1885.

Leaving the 19th century, the third essay addresses Barnes’ grief with the death of his wife of 30 years, literary agent Pat Kavanaugh. It was 37 days from her diagnosis to her death in 2008. This book was put together four years after she died. He had been writing about his grief during that time, just had not published anything. This third essay is the result of culling through hundreds of pages written by a bereaved husband. What a brilliant result that culling has produced.

This final essay, “The Loss of Depth,” is the heart of the book. These 55 pages are positively luminescent, not only for the gorgeous wordsmithery but for the unharnessed emotional pain articulated. The phrase “bares his soul” is insufficient – this man is writing from his bone marrow, his very core. I read it once for the beautiful prose and again for the nuances of the range of emotions. C.S. Lewis (A Grief Observed) kept popping into my mind. Barnes is Lewis without the spirituality. Also, Joan Didion (The Year of Magical Thinking). Brilliant literary minds recording their spousal bereavement, putting letters to the human experience of living with a mammoth void, and making us understand that though a common experience every grief is unique.

As anyone who has grieved for any loved one knows, people can say incredibly insensitive things. “(A) long-time American friend of my wife’s told me, within weeks of her death, that statistically those who have been happy in marriage remarry much sooner than those who have not; often within six months. She meant it encouragingly, but this fact, if it was one (perhaps only applies in the States, where emotional optimism is a constitutional duty), shocked me.” I just had to include this little swipe at the U.S. When I read it, I thought to myself, how very British of him.

In Levels of Life, Barnes tries to synthesize these three essays, but I personally do not think it worked. He uses metaphors from the first two essays in the final one, and all three are a joy to read. However, “The Loss of Depth” is what matters to this book. Reading it only and skipping the first two is a viable option.