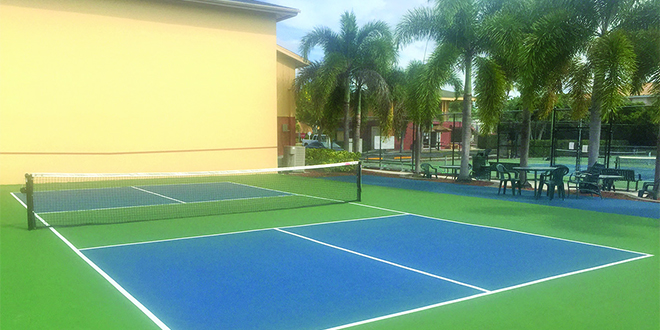 As a coach and a competitor, I am seeing an unprecedented number of new pickleball players on the courts. Many of these players are actively competing on a daily basis, and some are even playing twice a day, once in the morning and again in the afternoon. It is a sport that is easy to get hooked on. Having more competitors in the mix means that we need to be courteous to all players.

As higher level/more experienced players, we need to remember that at one point in time, we too were beginners. New players strive to improve and be able to compete on a higher level of play. Along with this, as in all sports, we need to make sure, that while we are challenging ourselves to improve, we are not over estimating our abilities and venturing into too deep of competitive waters.

Pickleball is somewhat different than tennis, because players rotate and play on a different court on a game-to-game basis, and don’t have a specific court assignment. Because of this, clubs quite often encounter the situation of having more players than open courts to be played on. Some facilities also experience lower level players mixing in the rotation with higher level players. These growing pains are being experienced at clubs and facilities across the country.

In pickleball, the USAPA has a player ranking system which is like the USTA player ranking system in tennis, both of which only consider results from sanctioned competition. In addition to the ranking system, the USAPA and the USTA have a rating description. Players are rated from a 1.0 to a 5.0 level. A 1.0 level player is described and defined as a complete beginner. A 5.0 level player is described and defined as someone who has mastered the sport and has nationally ranked, top level tournament competitive playing experience.

While both the USTA and the USAPA descriptions are self rated, there are some differences between the two, in what I will call, the determination and application of the rating.

First of all, the sport of tennis has a much longer history of utilization of its rating description and ranking system than the sport of pickleball. Most tennis players, at some point in time, have played USTA League competition and are able to determine their rating from the level of USTA League team which they may have previously or are currently competing on.

Pickleball is a bit different, because it is mostly played on a recreational/rotational basis, and not in an organized competitive league. While this recreational/rotational style of play is part of what makes pickleball so popular, it also creates kind of question mark of how to properly determine and sustain an ongoing rating of a competitor’s level of play. If you are not regularly competing in USAPA ranking tournaments, it can be difficult to determine your actual level of play.

In tennis, different areas of the country produce different qualities of levels of players. For instance, a 3.5 level USTA League player from Atlanta, Georgia, will normally be a stronger player than a 3.5 level player from 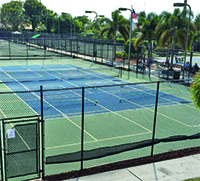 say, Omaha, Nebraska, simply from the fact that Atlanta is a huge tennis town, with hundreds of league teams and thousands of players. The same is true for recreational/ rotational pickleball. Areas of the country, which have a larger population of pickleball activity, will naturally produce a higher level of competition and a stronger player.

The majority of players here in our area, who have been playing either tennis and or pickleball for say more than three years, are somewhere between a 3.0 and a 3.5 level player.

Many of these tennis players have been competing for decades and are very happy and comfortable in the ongoing continued competitive challenge of their level of play. However, with the rapid growth of the sport of pickleball and the large influx of new players, many players are asking themselves, “Where do I fit in?”

The International Federation of Pickleball (IFP) rating descriptions can be found at www.ipickleball.org/ifp-rating-descriptions. Whether you are a complete beginner or a veteran player, I feel it is a good idea to review these rating descriptions and determine what your actual level of play is. Start at the very beginning of 1.0 and continue reading until you reach a point where you can honestly say, well, I am as good as that definition, but not quite as good as the next. Remember, without an actual computerized ranking from competing in sanctioned tournaments you may find yourself somewhere in the middle of two descriptions. For instance, you may feel you are a little bit better than a 3.5, but still showing some weaknesses in the description of a 4.0.

With that stated, be aware of the fact that not all clubs and facilities are utilizing the numerical rating system for structuring the levels of play. Many locations define the levels as beginner, intermediate and advanced levels of play.

Learn to TurnA Question of Balance