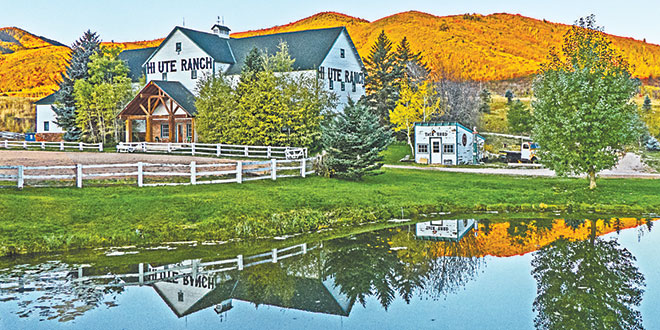 PHOTOS BY VICKIE KELBERThe orange glow from the first light of sunrise.

Some of you may have noticed that my column was on hiatus for a few months while I attended to some family medical issues. During that time, planned trips were cancelled, including my dream water view apartment in Manarola, Cinque Terre, Italy. Thank goodness for trip insurance. I purchased the insurance from Roam Right, via the insuremytrip.com website. Compared to a prior incident with another company, Roam Right was very accommodating in issuing a refund. Of course, having learned from that experience, I did have all my receipts and substantiating paperwork readily available in a folder on my computer.

Lufthansa was wonderful in refunding our tickets, as well as all the additional fees they charged for seat reservations. For other scheduled trips, the now defunct US Airways issued a refund, while Delta gave us future travel credit. I have found that in extraordinary circumstances it pays to speak to an airline representative and explain your situation.

It was almost a year before we were able to resume travel. How I looked forward to the TSA checkpoints! I was prepared.

I had ordered new passports two months before our trip. Although our old ones were not set to expire until January, 2016, we would be traveling internationally within 4 months of their end dates, and some countries will not admit you if it is within 6 months of expiration; additionally, all but two pages had been used for stamps and visas. Due to that, I ordered extra pages for our new ones.

Standard passports contain 17 blank pages for visas and entry/exit stamps. The passports I ordered, for no additional charge, contained 43 blank pages. I learned that I will never do that again, as the additional pages obviously make the passports bulkier, and they no 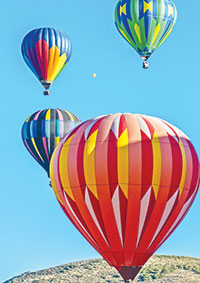 longer fit snugly in my waist security pouch. I don’t often keep them there, but if we need to have them in our possession and are in a location known for pickpockets, I do use the pouch. Realistically, a passport is only good for 4 ½ years, and we probably would not have filled all the pages of the smaller ones in that time. Even if we did, I would rather pay early for replacements and have the convenience of the more compact ones.

I had purchased new, very lightweight luggage. I loved how lightweight it was, but learned quickly that I couldn’t “stuff” it as well as my older, heavier bag. And, on the first trip, the stitching ripped in the front. Fortunately, it didn’t pose a danger to splitting the suitcase; it was purely cosmetic. It did have a warranty, which the company honored for a $20 shipping fee for the replacement. I had put my old luggage, which was getting kind of beat up, in a pile of “stuff” to get rid of. When I got home, I realized I wasn’t quite ready to part with it and rescued it from the pile, just in case.

I had the Delta app on my iPhone so I could check on the arrival of our departure plane in Ft. Myers; it was to turn right around and fly back to Atlanta (ATL), the first leg of our trip. On the way to the airport, I checked it frequently because weather was an issue and I knew we had only 45 minutes to take the train in ATL to the terminal for our second leg.

I try to be very organized when approaching the dreaded TSA checkpoint. I had our passports, boarding passes, a credit card 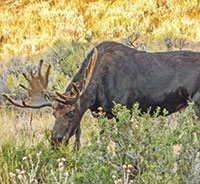 Our travels afforded new experiences; moose in our backyard.

and some money in a holder around my neck. I had even purchased a new one that was RFID blocking. These protect anyone with a handheld scanner from reading the personal information on passports and chip credit cards. While this may not be quite the problem that news reports make it out to be, I figured it couldn’t hurt to be on the safe side.

I had everything I needed to remove from our carryon (laptop, extra hard drives, plastic bag with small liquids) all together within easy reach. We were headed to Salt Lake City where I planned to sign up for Global Entry. Hopefully, this was the last time I would have to remove those items.

My jacket was stowed, my glasses off. My husband and I both lucked out at the first checkpoint as we were given the blue “get out of jail free” cards, or in this case, do not need to remove shoes cards. I was set. We had between us a small, wheeled carryon, a backpack, and purse. I gave the backpack, which contained nothing that had to be removed, to my husband, as he does not suffer inconvenience easily. Wouldn’t you know, it got tagged. Apparently, a stylus that we never use, yet remains attached to our iPad Air case, resembles a pencil detonator. The TSA officials were very nice about it. I could tell they didn’t really believe it was something dangerous, yet they did have to unload the backpack and check it out. You can be sure I got rid of that stylus before our next security check.

Despite these missteps that were learning experiences for me, it was nice to get back to traveling. Our first trip was back to Park City, Utah, which afforded some 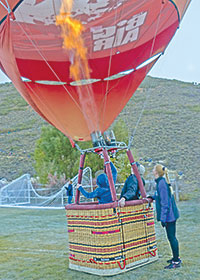 new and different experiences. Real cowboys in restaurants. TV ads for singles on a website called farmersonly.com. We are used to seeing dolphins and manatees in our backyard on Marco, but how about moose! For three mornings in a row, there were two large bull moose in our backyard and driveway.

The moose tolerated my snapping lots of photos and videos, but they soon tired of me and one raised his head, looked straight at me, and snorted…twice. I knew it was time to bid them adieu. I’ve been told that the snort warning isn’t as threatening as a roar, but I wasn’t taking any chances. In the West, moose can be more dangerous than bears.

It had been almost 30 years since we attended a balloon ascent and we had the opportunity to go to “Autumn Aloft,” a balloon festival in Park City. There were colorful balloons from all over the country; a bright yellow one with a bucking bronco and the word “Wyoming” emblazoned on it, quite a few stars and stripes, some advertising companies. My favorite, of course, was the one adorned with palm trees.

Finally, traveling again afforded the opportunity to experience the changing seasons; the vivid reds and oranges of the fall trees, the glowing yellow of the aspens. When that first snow frosted the mountains, though, I knew it was time to go home.