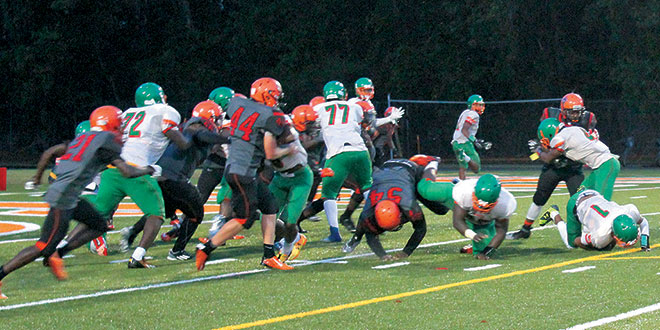 There were both good and bad plays, but more good ones, in Lely’s 33-27 win over Blanche Ely in its spring game on May 20.

Blanche Ely traveled to Lely from Pompano Beach to play in a steady downpour in the first half that saw the Trojans take the lead and stay ahead.

Both teams had breakaway plays, yet each had great moments on defense.

A major defensive thrust for Lely came as the seconds wound down in the second quarter, but a lapse on defense set up the possible score for Blanche Ely.

The Trojans had the Tigers buried at its own one-yard line, but a risky screen pass in the end zone resulted in 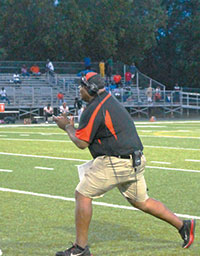 Coach Maurice Belser runs onto the field to congratulate his defense for a successful goal line stand at the end of the second quarter.

a breakaway run to the Lely nine-yard line. One play later the Tigers were at the two. That’s when the Lely defense became a stone wall, keeping the Tigers out of the end zone as time expired for the half.

Lely quarterback Jacquez Carter ran for 101 yards and threw for 181 more, including two touchdown passes. Some of those yards in both cases came after Carter was forced out of the pocket as the Tigers defensive line had the edge in size over Lely.

Defensively, Lely’s line did well, but the lack of a consistent pass rush and key mistakes by the defensive backs led to all four of the Tigers’ scores. Pass plays of 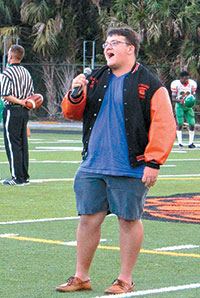 One play showed how coach Maurice Belser teaches to play out a play. Lely fumbled and it appeared the Tigers had recovered, but tackle Rolph Tanis battled under the pile-up to steal it back.

Lely kicker Noah Reich showed he’s the front-runner for the job. He made good on three extra points and two field goals.

Overall there were many bright spots, giving Lely a positive outcome as it heads to summer workouts.

For more photos go to www.coastalbreezenews.com.