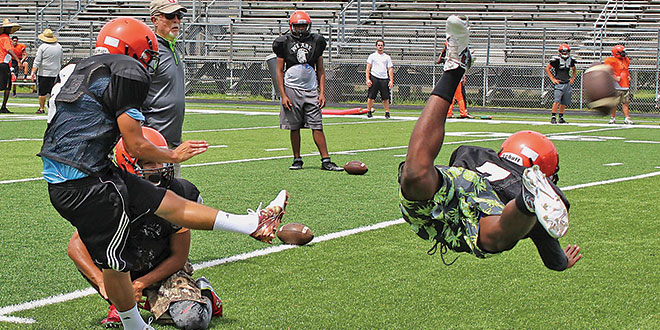 Photos By Roger LalondeA Lely defender flies to block a Noah Reich field goal, but is a bit late as it sails 42 yards through the uprights. The holder is and will be Hakeem Durity.

It is a new head coach, with mostly new assistants, looking to begin a new day with the Lely football program.

Maurice Belser gained his first experience with the Trojans in its spring game, shortly after replacing Culmer St. Jean.

Belser chose to replace many long-time coaches as he puts his mark on this year’s team. 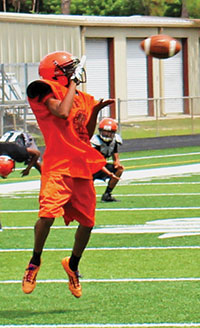 Lawrence Liberiste hauls in a pass during practice.

Soon the new-coach chatter will be over.

“The team has made good progress, we all have worked at doing things right,” Belser said. “We will be working to play a disciplined game that can be the difference.”

One of the keys is defensive linebacker Will Glasser. “He’s 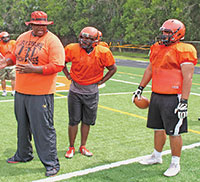 Coach Maurice Belser explains how to block during drills with Robert Woodward and James Guerrier.

nasty, plays whistle to whistle. He’s the leader of our defense,” Belser said.

Junior quarterback Jacques Carter has experience and showed his potential in the spring game. He ran for 101 yards and threw for 181 and two touchdowns in Lely’s 33-27 win over Pompano Beach-Blanche Ely. 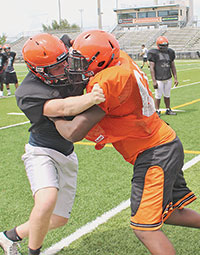 a difference are Jason Jean and Mark Noel, with Taeijon Wright and Jean Joseph as wide receivers.

Kicker Noah Reich “Is something special,” Belser said. “He can be a game changer.” In practice, with defenders charging, Reich kept his cool for a 42-yard field.

There are expectations for improvement after a 2-8 season. Its first game, although considered preseason, will show how far Lely has come.