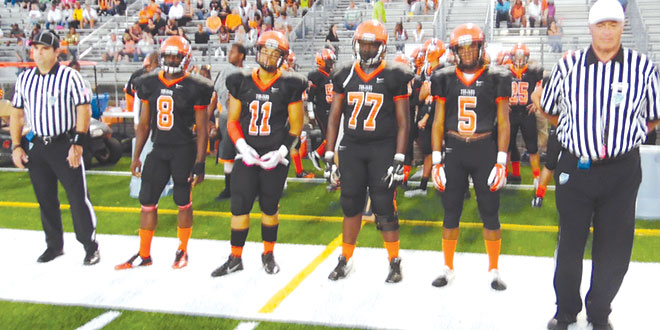 The Manta Rays did snap a five-game losing streak by pounding Canterbury, 52-13, last Friday. MIA has been putting up the points, even against good teams, but haven’t had much luck in the late goings of their five losses. In district losses, to St. John Neumann, Evangelical Christian and Moore Haven, each team secured victories in the second half.

Against Canterbury, the Manta Rays were without the team’s leading all-around offensive threat in Cayden Couture and defensive lineman Bon Dees. Couture has a knee injury that may keep him on the sidelines, and Dees is recovering from 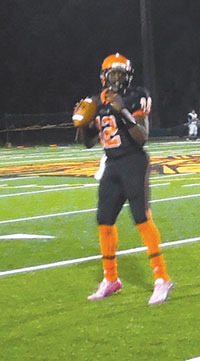 Lely quarterback Lik Estilien looks downfield for a receiver in the Trojans, 27-14 win over Sebring. Estilien threw four passes, with one a touchdown.

“We are waiting for the swelling to go down so that he (Couture) can have an MRI,” MIA Coach Greg Fowler said. “It may come down to a game-time decision.” Dees is going through the concussion protocol, and Fowler hopes he will be cleared by Friday. Gottfried Joseph, a free safety on defense and a backup tailback, will be back.

Tyler Gresham, who has been nagged by minor injuries all season, had a breakout game against Canterbury. He recorded touchdowns by rushing, pass-catching and an 85-yard TD interception. “He finally got healthy, and it showed Friday night,” Fowler said of Gresham.

FBA has already clinched the district title with a 56-23 thrashing of Evangelical Christian. FBA tallied seven rushing touchdowns and one through the air.

“We want to establish a running game early,” Fowler said. “Defensively, they are big up front, and we need to keep them in front of us to move the ball.”

The Manta Rays have shown they have many 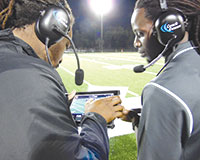 offensive talents, including its sophomore quarterback Andrew Fowler, the coach’s son. Andrew has the top statistics over all area quarterbacks. He added another TD pass, giving him 12. Going into the game he had marked up 1,210 yards through the air. Wide receiver Cole Stretton grabbed his sixth touchdown catch in sharing the lead in the area. Couture has eight touchdowns through the air or on the ground. Patrick Michel, who missed two games, has four touchdowns and has been a key on defense. Tyler Wallace is a major threat at wide receiver, having a 69-yard catch to the Canterbury one, then a one-yarder for a touchdown.

“Offensively, we just have to take care of the ball,” Fowler said. “They have a great offense and defense, but you never know what might happen on a Friday night.”

Lely’s defense, at times, smothered Sebring’s offense in winning 27-14 last Friday. The defense recorded a safety in the first and fourth quarters. For the 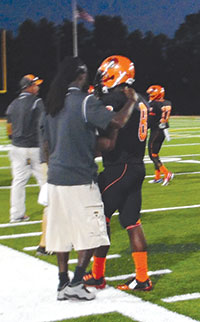 Liberiste sealed the game on defense. With Sebring trailing 20-14, Liberiste intercepted a pass at the goal line with just three minutes left in the game. He ran the ball back to midfield and capped off the drive with a touchdown run with 1:14 left in the game.

Immokalee had a bye as they go into Lely to decide which team wins the district title. The loser still makes the playoffs. Lely has a three-game win streak, but knows it has to play better than it did in Friday night’s win to beat the Indians.

Lely Coach Culmer St. Jean said his Trojans have to play a clean game on both sides of the football. The Trojans hard-charging running game will be a major factor in its battle to win the district title.