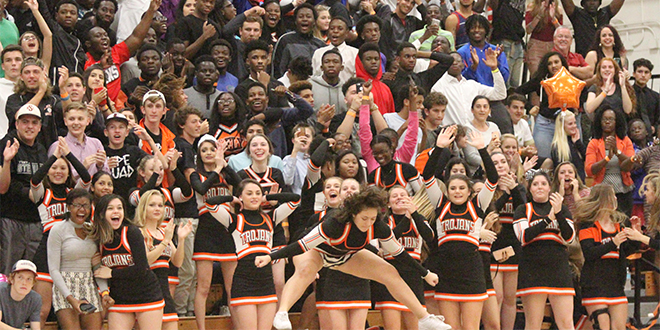 The Lely crowd celebrates near the end of regulation. The Trojans lost to Naples in double overtime.

Round three of the Naples-Lely basketball rivalry was not for the faint of heart. After splitting their first two meetings of the season with each team winning by just two points, the rubber game took two overtime periods to decide. Naples High left the Trojans heartbroken on their home court Friday night, January 27. The final score was a deceptive one, 98-88.

The teams were tied at 73 at the end of regulation. At the end of the first overtime it was 83-83.

“In critical moments we ended up turning the ball over,” Lely assistant coach Taylor Bell said, “and when that happens Naples tends to take advantage of it. Critical turnovers.”

It was a game of runs. Naples jumped to an 18-7 lead before the Trojans were able to settle down. After only two Trojans scored in the first quarter, Oliver Dumel caught fire in the second quarter, scoring 16 of his 24 points—including four three pointers.

Lely eventually took the lead at 40-39 with 6:13 left in the third quarter. The Trojans led by as many as 10 points when they went up 64-54 on a Rudge Hyppolite steal and breakaway dunk.

Lely looked like they were on their way to a win until Naples scored seven straight to tie the game 67-67 with 2:20 remaining in regulation.

Lely answered back and again looked in charge, leading 71-67 with a minute left. But Naples would not be denied as Sevin Brown, who led all scorers with 37, nailed a three.

Lely’s outstanding point guard Hyppolite did all he could, scoring 36 points in addition to running the offense and playing aggressive defensively.

“Sometimes Rudge feels like he has to do it all himself—and he can, he’s done it before,” Bell said.

The two teams duked it out in the first overtime, scoring 10 points each in the four-minute period. But the Trojans were outscored 13-3 after big man Matt Talko fouled out early in the second overtime. Talko, a 6’6, 260 pound sophomore, finished with 15 points, all after halftime. Perhaps, most importantly, he was a force around the basket.