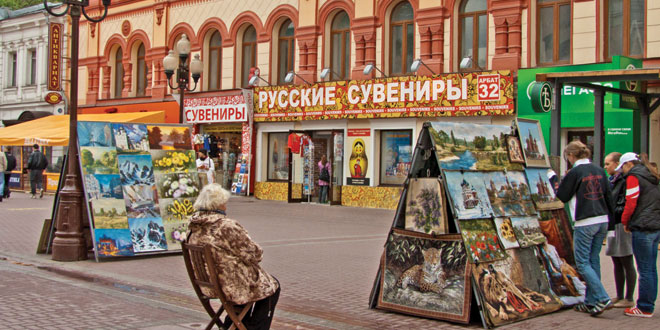 When we visit a country in which a language other than English is spoken, I always try to acquire some knowledge of that language. For me, it is part of the fun of learning about that country and its culture. It aids in communication when traveling, shows a respect for another culture, and it’s good brain exercise!

At times, a little knowledge of the local language has meant survival. We enjoy being independent and visiting places off the beaten track; this means that we frequently find ourselves in places and situations where no one speaks English. Knowing a bit of the language has helped when we were lost in the very rural Emmental region of Switzerland. In Greece, it assisted in negotiating our way on buses to travel all over the country. Once while staying in Sintra, Portugal, I got on an incorrectly marked bus. Not soon enough I realized that I was in the hinterlands outside of town rather than back at our apartment. With my very limited knowledge of Portuguese, I was able to tell the driver my plight and find out how to get back to town. He dropped me at a small cafe in the middle of seemingly nowhere. I was a little skeptical, but I did get safely back to the apartment.

When we visited the Czech Republic and Hungary soon after the fall of the Iron Curtain, I was still working and only had time to learn a few phrases and courtesies in those languages. Fortunately, when we were in some difficult situations, I found that the older citizens of those countries spoke German and was able to use that language to communicate.

The downside of learning a bit of the language, though, is that if you become somewhat facile and use it, people often assume you actually know 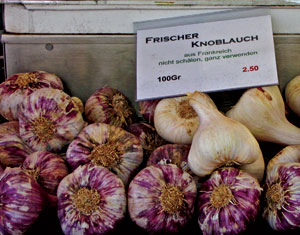 This garlic found at a market in Bern is “do not peel” from France, good for all uses.

the language. Too many times, I have begun simple conversations when walking into a store or purchasing tickets, only to have the other person continue on rapidly with the conversation leading to my blank stare and apologies that I don’t REALLY speak or understand their language.

If a country uses an alphabet other than a derivative of the Latin alphabet, it is helpful to learn it. Off the tourist trail in Greece, many signs were only in Greek; knowing the alphabet was helpful in getting around. In Moscow, we would have had great difficulty in the very large, crowded metro stations where many lines come together. All of the signs were in the Cyrillic alphabet. I remember one station in particular that had columns and columns of signs with all of the stops listed. It was a little overwhelming at first to try to find our destination. I enlisted my husband’s assistance by asking him to look for a word that began with a letter that “looked like a house” which was my way of describing the letter “D” in Cyrillic.

Although I am a visual learner, I have found that language instruction DVDs transferred to my iPod has become the most efficient for me because I don’t have to find extra time to work on the language. When I take my morning walk, I pop on the iPod and begin learning/practicing. So, yes, if you see me walking and it appears I am talking to myself, I am really just preparing for our next trip.

There are many programs available for learning another language. My favorite is the “Learn in your Car” series, but they don’t have all languages as I found out when trying to learn Croatian. Pimsleur is an effective, albeit expensive series. It’s not great for learning typical tourist phrases, but it gives a 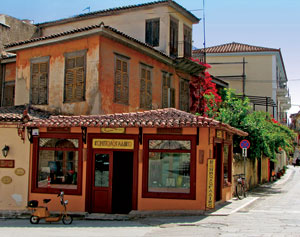 The sign on this shop in Nafplio, Greece advertises worry beads

good understanding of the structure of the language. I’ve used it to gleam some basic knowledge and then branched out to other programs for more tourist vocabulary. Travelzoo.com frequently offers it half-price. I’ve also used Living Language, Berlitz, and the “Learn (whatever language) in 7 Days” programs; the In-Flight DVDs are limited to just 60 minutes but do provide some good basic phrases.  Penton Overseas and Transparent.com are good resources for language instruction materials.

There are many options online for learning a language. I always have good intentions to pursue online learning and have even started once or twice. Alas, I never stick with it; time always seems to be an issue. The Collier County Library system subscribes to Mango Language which offers a large selection of languages; access it via the library’s website. BBC.co.uk/languages has free online instruction for 40 languages and you can even download audio files to use on your iPod. Rosetta Stone is the premium language course, but it’s price has always made it out of my league for casual learning. Transparent.com can be expensive, but less so than Pimsleur or Rosetta and there is a free express Before you Know It that you can download for many languages.

Babbel is highly rated, but limited to 11 languages. There is a small monthly fee for it, but a free trial is offered. Livinglanguage.com and Rocket Language also offer free trials and the former offers some free downloads. Learnalanguage.com has games and flash cards for 8 languages. Memrise.com is a site that claims to use a method based on “brain science”. Busuu.com is an online community for learning a language. FSI-language-courses.org provides text and audio courses that can be downloaded; from the Foreign Services Institute, the material is quite a bit dated. If you enjoy podcasts, search iTunes for various language lessons including many 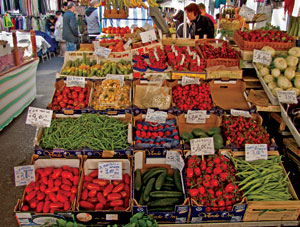 A good way to learn the names of local produce is by visiting markets such as this one in Florence.

There are numerous Apps for smartphones and tablets. Babbel and TripLingo are highly rated. Busuu offers a companion app as does the costly Rosetta Stone. BYKI has a free version and Living Language allows you to try introductory lessons. MindSnacks uses a game approach but only offers 6 languages.

Of course, if learning a new language is too daunting for you, you can always just purchase a pocket phrasebook and use it as you need it. Carrying a notebook with you is helpful. You can write down key phrases to use, write down an address, or draw a picture to aid in communication. And, if you do try to speak a word but have the pronunciation wrong and receive a quizzical look from someone to whom you are inquiring, you could always write down the word. This happened to us the first time I tried to find the zoo in Basel, Switzerland. I asked, “Wo ist der Zoo” pronouncing zoo the way we do in English. After repeating it a few times, the Swiss gentleman I was asking realized I wanted to find the “zooh”. For those of you more technologically inclined, there are wonderful translation apps that you can use on your smart phone or tablet rather than the old fashioned notebook. At the very least, though, try to learn a few phrases of courtesy/necessity such as “please,” “thank you,” “good day” and “where is the bathroom?