Learning About Sharks in the Ten Thousand Islands 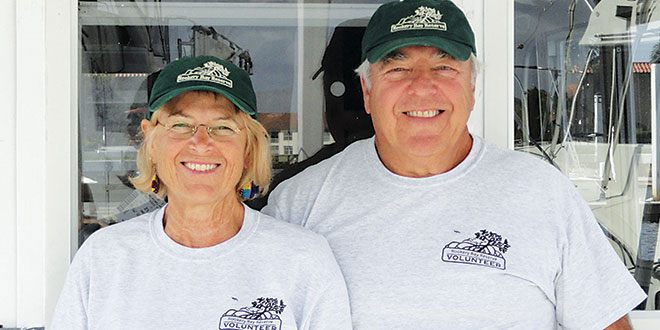 Paulette and Bruce Carabelli have been Rookery Bay volunteers since 2007. photoS by renee wilson

In the 1960s, a large residential neighborhood was created northeast of Marco Island called Southern Golden Gate Estates. Although the unfinished development was later abandoned, a network of roads and miles of canals were built that significantly altered the natural flow of fresh water to the estuaries in the Ten Thousand Islands.

Today, Rookery Bay National Estuarine Research Reserve manages most of the estuaries downstream of that failed development. Because estuaries provide important nursery habitat for sharks and other marine life, the Reserve has been monitoring water quality there since the late 1990s. Studies indicate that altered flows due to the roads and canals resulted in lower salinity values, or more fresh water, flowing into one bay, the Faka-Union Bay, and a prolonged increase in salinity (less fresh water) in adjacent Pumpkin Bay. Fakahatchee Bay, to the east of Faka-Union, remains relatively unaltered.

Sharks come into shallow backwater estuaries to give birth to their young. These back bays provide young sharks with plenty of food and protection from potential predators, such as larger sharks. In order to gain an understanding of shark nurseries and relative distributions before, during, and after restoration taking place in the Ten Thousand Islands watershed, researchers began collecting shark demographic data on a monthly basis in 2000.

Rookery Bay Reserve’s fisheries biologist Pat O’Donnell, with help from a team of volunteers, is monitoring shark use in these bays each 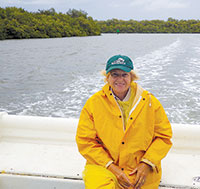 month using a monofilament gill net and baited long lines. With a donated houseboat as home base, the team sets the nets and lines two hours before sunset, and watches closely for four hours. Captured sharks are carefully brought into the boat to be identified, tagged, measured, weighed and released. Water conditions, such as temperature and salinity, are also recorded.

The job requires long nights and a tolerance to the mosquitoes that come with the territory in the Ten Thousand Islands. Although their routine has been routine, they are learning much more than they had anticipated, and the volunteers are lined up for their assignments up to a year in advance.

O’Donnell’s team of volunteers collectively donate an average of 1,500 hours each year. Amongst his longtime volunteers are Paulette and Bruce Carabelli. The duo started spending vacations on Marco Island in 1985, and now return to their home town of Yardley, Pennsylvania, only for summer. They have been married 50 years and are still happily working together. They have volunteered with the shark program regularly for eight years. According to Paulette, helping to gather data for a worthy cause with interesting, educated partners is always exciting.

“One is never too old to learn and participate in educational programs. Whether it is a rainbow, manatees, rays, turtles, sawfish, or the full moon, nature always gives us plenty to enjoy,” she said, adding that being 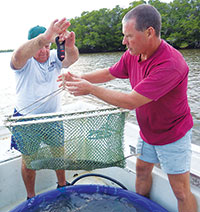 able to watch others hold their first shark and experiencing their excitement is priceless.

Bull sharks (Carcharhinus leucas) are more tolerant of low salinities than other sharks, and freely move from the marine environment in shore to locations where the water is less salty. Results to date indicate that bull sharks are by far the dominant species caught in the bay where salinity is the lowest. Through this program scientists hope to learn more by documenting the different types of sharks found in each location to determine how they react to changes in their environment.

Another step in that direction was a $10,000 donation, received recently from the Guy Harvey Ocean Foundation, in support of a graduate student to complement the shark monitoring program. Graduate student research provides an excellent opportunity to establish and enhance collaborative partnerships with university professors, state and federal agencies, independent research institutions, and non-profit organizations, which helps the Reserve meet its mission goals.

Renee Wilson is Communications Coordinator at Rookery Bay National Estuarine Research Reserve. She has been a Florida resident since 1986 has joined the staff at the rese