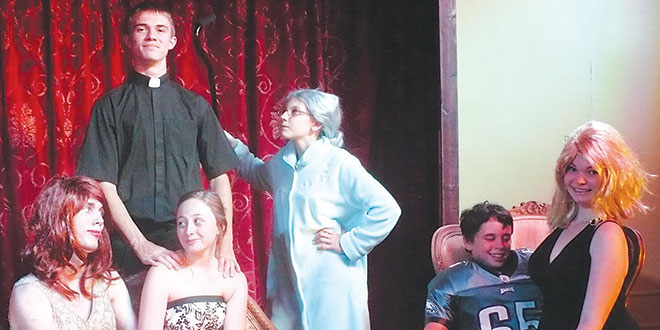 The cast of “Leading Ladies,” which opens on June 12. SUBMITTED PHOTOS

The Box Office is open and tickets are currently on sale for the Island Theater Company’s upcoming summer production of “Leading Ladies” sponsored by Jump Hair and Nails and the Island Diet Center.

Ken Ludwig has had six shows on Broadway, and seven in London’s West End, and his plays and musicals have been performed in more than 30 countries in over 20 languages. His first play on Broadway, “Lend Me a Tenor,” which the Washington Post called “one of the classic comedies of the 20th century,” won two Tony Awards and was nominated for seven. He has won two Laurence Olivier Awards, the Charles MacArthur Award, two Helen Hayes Awards, the Edgar Award for Best Mystery from The Mystery Writers of America, the SETC Distinguished Career Award and the Edwin Forrest Award for Services to the American Theatre.

In this hilarious comedy two English Shakespearean actors, Jack and Leo, find themselves so down on their luck that they are performing “Scenes from Shakespeare” on the Moose Lodge circuit in the Amish country of Pennsylvania.

When they hear that an old lady in York, PA is about to die and leave her fortune to her two long lost English nephews, they resolve to pass themselves off as her beloved relatives and get the cash. The trouble is, when they get to York, they find out that the relatives aren’t nephews, but nieces! Romantic entanglements abound, especially when Leo falls head-over-petticoat in love with the old lady’s vivacious niece, Meg, who’s engaged to the local minister. Meg knows that there’s a wide world out there, but it’s not until she meets “Maxine and Stephanie” that she finally gets a taste of it.

The cast of “Leading Ladies” are no strangers to the stage. They have performed in many local productions over the years including “Arsenic & Old Lace,” “A Christmas Story,” “Into the Woods,” “Annie,” “Wicked,” and last season’s “The Odd Couple.” “The cast is grateful for the community support they have received over the years, and hope the community will join them once again for their latest production” says director, Gina Sisbarro-Penzo.

Abby Martin started acting when she was just six years old in the production of “Annie.” Abby is now a graduate of Lely High School. Abby’s most notable performance was Glinda in “Wicked.” Aside from her superb acting, she has the most beautiful voice and can hit those high notes perfectly. Other stellar performances were the roles of Claire in “The Breakfast Club” and Cinderella in “Into the Woods.”

Eddy Ludwidsen is another veteran performer with his first role as the Candyman in “Willie Wonka and the Chocolate Factory.” Not only has he evolved as an actor, he has gotten really, really tall.  The inflections in his voice and the ability to take on his characters are performances to take notice of.  Eddy will be entering his junior year at M.I.A. High School.  Eddy’s notable performances were Brian in “The Breakfast Club,” Mortimer in “Arsenic and Old Lace” and Murray in “The Odd Couple.”

Ryan Sullivan is whom we call the Marty Feldman of his time, with those big, blue, expressive eyes. That’s what landed Ryan in his first role as an Oompa Loompa in “Charlie and the Chocolate Factory.” Ryan is our funny man, and has played Ralphie Parke in “A Christmas Story,” Wilbur Turnblad in “Hairspray,” Vinnie in “The Odd Couple,” and most recently the baker in “Into the Woods.” Ryan will be entering as a high school freshman at Marco Island Academy.

Emily Boxma we call “the little girl with the big voice.” She wowed theater audiences in her first showcase as Christine in “Phantom of the Opera,” what she called her dream role of a lifetime, and boy did she earn it. Emily is a great character actor and can take on any challenge. Her notable performances are Grandma Willow in “Pocahontas,” Elaine in “Arsenic and Old Lace” and Jack’s mother in “Into the Woods.” Emily was stage manager for last year’s “Music Man” show. Emily will enter as a high school freshman at Marco Island Academy (MIA).

Cooper Ussery. Amazing and uninhibited best describes this young man. Cooper is another youngster who came alive on stage in his performance as one of the new theater owners in “Phantom of the Opera,” and has landed lead roles since that performance. Cooper has become one of the mentors that our younger actors look up to. Notable performances included the older Ralphie Parker in “A Christmas Story,” Bock in “Wicked” and his brilliant performance as Felix in “The Odd Couple.” Cooper will attend high school in the fall as a freshman.

Alexandra Anderson. This gorgeous young lady is part of the acting Anderson family. She and her siblings have been in theater for years in so many different productions. This is Alexandra’s first break-out role as the lovable and dimwitted Audrey. You have to be very smart to play “that dumb.” Alexandra has risen to the rank of star in this performance. There will be so much more to come from this brilliant young lady. Alexandra will be entering the eighth grade at Marco Island Charter Middle School (MICMS).

Dylan Rogers came to theater last year to help out as a technician. That’s when the magic happened, and he was recognized for his comedic talent and his amazing memorization skills. Although Dylan is new to this company, you may recognize him as Macbeth in this spring’s MIA Shakespearian Festival. As delightfully funny as he is, he has fallen in love with Shakespearian theater and has the ability to perform in the true form of Shakespearian language with depth and zest. Dylan is a graduate of MIA High School.

Jacob Wagner is our newest rookie to the stage. Jacob’s experience has been with his middle school productions at MICMS. It was a wonderful surprise to have Jacob audition for the lovable, bumbling jock Butch. Jacob is a natural, and has added his own little comic twist that the director incorporated into his performance. Jacob has earned his rookie wings, and we look forward to much more from this talented young man. Jacob will be attending Lely High School as a freshman.

“Leading Ladies” opens June 12 and runs weekends through June 20, at the Marco Lutheran Church great room, 525 N. Collier Blvd., Marco Island. Evening performances begin at 7:30 PM. There is one Sunday matinee performance on June 14 at 2:30 PM. Doors open a half-hour prior to performances.

Tickets are $10 for adults and $5 for students. Tickets can be purchased in person at Marco Office Supply, 571 Bald Eagle Dr., or Centennial Bank, 615 E. Elkcam Cir. They can also be purchased online at www.theateronmarco.com, by calling the ticket office at 239-394-0080, or at the door 30 minutes prior to each performance.

Group discounts are available! To reserve seats for a group of 10 or more, please call the Box Office at 239-394-0080 to make your reservations.

Opening night tickets include the “Meet the Cast” opening night party following the performance. Additional cast information, show dates and tickets can be found at www.theateronmarco.com. To stay up on all the latest news “Like” their Facebook page at “Island Theater Company.”

Featured in the cast are:

Jacob Wagner as Butch and Moose