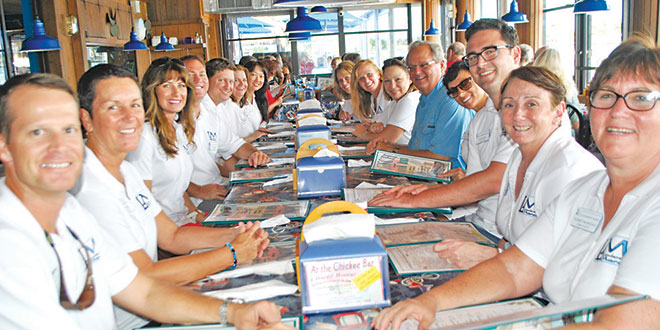 The Leadership Marco sessions are underway! On August 12, History was the subject and the class of 2015 learned about the heritage of Marco Island. Laura Schneider of Iberiabank gave Coastal Breeze a great recap of a most educational adventure.

Class began with a trip to the Marco Island History Museum where Craig Woodward guided them on a tour of the exhibits and local history. The group then hopped aboard the bus for a trip to local landmarks around the island.

“I’ve lived here for 10 years, and there is a lot I didn’t know,” says Laura Schneider. “We went to Otter Mound, which is where the Barfield’s originally lived. The house Mr. and Mrs. Ernest Otter lived in during the 1950’s burned down in the 80’s, but the outhouse survived along with a shell wall.”

The group then visited the site of the Indian Hill Observation Tower that used to stand on the high point of the island. At a time when aerial pictures were not common, this afforded people a chance to get a personal, birds-eye view of the island.

“What a great marketing tool for the time,” comments Laura. “It’s a view that could really sell the buyers and developers

on the Mackle’s vision of Marco Island.”

Although the tower structure is no longer there, stone steps remain as a marker for visitors interested in experiencing some of Marco’s early days.

Laura talks about their trip to Olde Marco. “Craig prepared a nice notebook for us and we had a chance to visit some of the places that used to be there like the general store. We learned about the William T. Collier family, including son William D. “Capt. Bill” Collier (no relation to Barron Collier) and how instrumental they were in the development of Marco as a community.

“We spent about nine hours for this session, but it could easily have spent three days learning about that aspect of our history; the early canneries, the stores, commerce and industry.”

The group broke for lunch at Snook Inn and then returned to the Museum for some films and further enlightenment on Marco’s interesting history.

“Now I know what these names mean,” comments Laura about the names of some streets and alleys. “There’s a Wells Sawyer Way, named for the artist who helped document much of the findings at archeological digs here on the Island. There’s Jim Vensel Way who worked closely with Herb Savage (another street 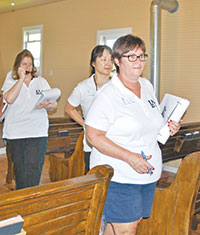 The group got a tour of the Church of God, located at the Marco cemetery. This is the fourth location of the church.

name) and the Mackles in designing the vision that is Marco Island.”

One of Laura’s epiphanies during this session was the vision of the Mackles (and others) in creating this community. “It blew me away! To look at this area and design and build a beautiful, viable, forward-thinking community is amazing. They truly wanted a place that was unique and enjoyable. It wasn’t just about money. It was about a lifestyle that many people could afford and enjoy for a long time.”

So why is history an important part of Leadership Marco? Laura answers:

“It shows you so much of our heritage was built by vision and fortitude. It’s a way of bringing things full-circle to us, as leaders in the community, to make an impact on Marco moving forward. We learn from the past, and then apply that knowledge to make solid decisions for the future. Each of us has a set of skills we can use, and based on a solid foundation of what was, what is and what can be, helps us to work together for our community.”

Many thanks to Laura Schneider of Iberiabank for sharing her experience of the history session. Stay tuned to the pages of Coastal Breeze for more session updates.