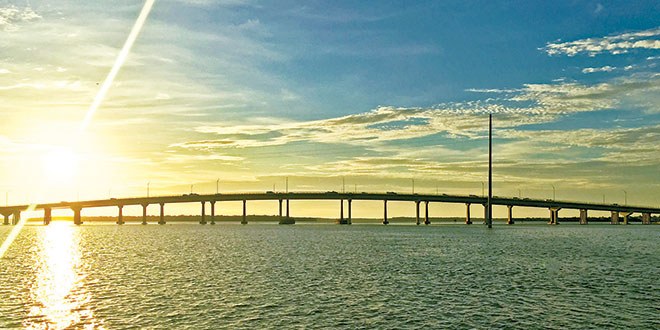 The group got a great sunrise view while aboard the Dolphin Explorer. PHOTOS BY STEVE PURCELL

Leadership Marco was once again in session on September 23. This class was focused on the hospitality and tourism industry in our area. Not a big deal, you say? Read on.

In Collier County, based on the 4% Florida Tourist Development Tax, nightly room revenue contributes about $2 billion annually to the local economy. To put that into perspective, the entire GDP of Belize is about $1.7 billion and ranks 167th in the world (According to the International Monetary List of 2014).

“It is fascinating the abundance of information that is available and what it shows,” says Leadership Marco student Steve Purcell, Century 21 First Southern Trust. “We are able to see where our visitors are coming from, what they do and the impact on our local businesses and overall economy.”

Demographic data helps local business and community services plan to better serve our visitors. Recent data shows a definite trend; Marco Island clientele is shifting from the business/executive demographic to a younger, more family-oriented clientele. The reaction to this shift is very evident in much of the remodel work being done in local hotel properties. Many businesses are updating their operating models to accommodate the changing needs of Marco Island visitors.

There is also an increasing overlap in when visitors are coming here. While we still have our busy winter season, the spikes in visitor population, over the course of the entire year, are flattening a bit. People are making Marco their chosen destination throughout the year – not just during the “seasonal months.”

Steve learned that Marco Island alone received 321,475 visitors between January and July of this year. While the numbers are impressive, even more so are the reasons they come to Marco Island, and keep coming back to the tune of a 90% rate of return.

Geography does play a part in Marco’s allure, but we also have a vital business and community environment that visitors love and return to on a regular basis, with a 97.6% satisfaction rate.

“The benefit all the local businesses provide, whether it is in goods or services, is immense,” says Steve. “Without the dedication of everyone on Marco, to make this a great community to live, work and play, those visitors would not return. It is so important to understand the relationship, and responsibility, we all have in making Marco such a wonderful place.”

A view from the Hilton penthouse.

would be a good time to point out that in 2014, Marco Island was ranked the #4 island in the world (#1 in the US), according to TripAdvisor. Steve says much of that has to do with the services, restaurants and many other businesses located here. Plus the fact that you can drive to Marco instead of having to fly or boat in (like other tropical islands).

The morning started with the class taking a trip on the Dolphin Explorer. It is just one of attractions that bring people to Marco. The group learned about the many dolphins that inhabit the area and the environment in which we all live. After breakfast at Petite Soleil, the tour continued.

“The upstairs at the Old Marco Inn was fascinating,” says Steve smiling. “There’s stories of ghosts roaming the halls and we even went into the attic. One of our group even claimed to get a picture of one, but the jury is still out on that.”

The group toured other hospitality businesses, big and small. Steve thought it was great to learn how all the places do business and why they are so successful. Visitors have so many different tastes, which affords so many to carve out their own niche in which to do business.

“The occupancy rates at all these places is extremely high,” says Steve. “It really helps make Marco a diverse community that attracts, and retains, a variety of people and service their needs on an individual basis. Everyone is so dedicated to reaching the next level and offering such quality in everything they do.”

The group concluded the day with a panel discussion that gave a great perspective on the hospitality and tourism industry. It also included a presentation by Jack Wert, Naples, Marco Island and the Everglades CVB Executive Director. He provided a lot of research data and explained what it meant and how to use it to better enhance the entire Marco Island experience.

“It’s such a team effort to make this community what is,” says Steve. “The Leadership Marco program really shows you that, and I’m proud to be a part of it. I encourage everyone on the island to go to the beach, walk up to any of the hotels or restaurants, and be a tourist as often as you can. It’s an amazing feeling and why we all are here.”