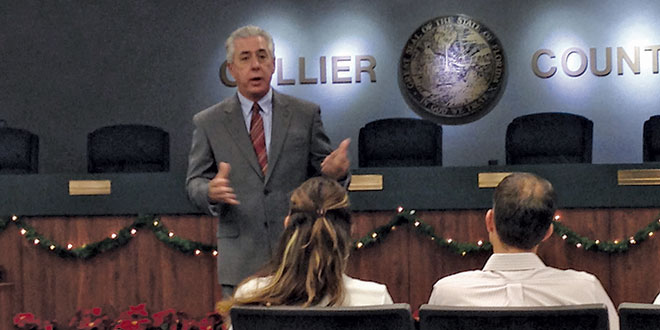 On their last day of class, students spent the day learning about Collier County government, both in Naples and on Marco Island. Speakers at the Collier County Government Center included Collier County Manager Leo Ochs, Commissioner Donna Fiala and Supervisor of Elections Jennifer Edwards. Presentations were also given by the county’s director of zoning, tax collector, property appraiser and clerk of courts.

Circuit Judge Lauren L. Brodie met with students in her courtroom, asking them to think about “how to make a difference” in the world. She described a few of her most challenging cases, and encouraged students to “help the future” through programs like D.A.R.E. (Drug Abuse Resistance Education), 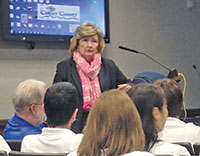 which help educate schoolchildren about the dangers of drug use.

Later in the morning, students met with representatives from emergency management and the sheriff’s office to get an overview of emergency operations in the county. Back on Marco Island, after a presentation and tour at Mackle Park, students met at City Hall with City Council Chair Bob Brown and City Manager Roger Hernstadt, who answered questions about local government. The information-packed day was generously sponsored by Tom Wagor, First Florida Integrity Bank.

Leadership Marco 2015 graduates will have the chance to use their experience to improve on the 2016 leadership classes, which they will organize and plan. Immediately following their last class, students were already at work selecting their co-chairs for next year, and finalizing

The Leadership Marco 2015 class on their last day. PHOTOS BY JESSICA HERNSTADT

the 2016 class dates and assignments. Classmates chose Marco Island Academy’s Principal Melissa Scott and Marco Beach Ocean Resort’s Lynn Alexander to co-chair the 2016 Leadership Marco class. Melissa told us that although she “will miss her class,” she is “really excited about next year.” Graduation for the 2015 class will take place in January 2016.