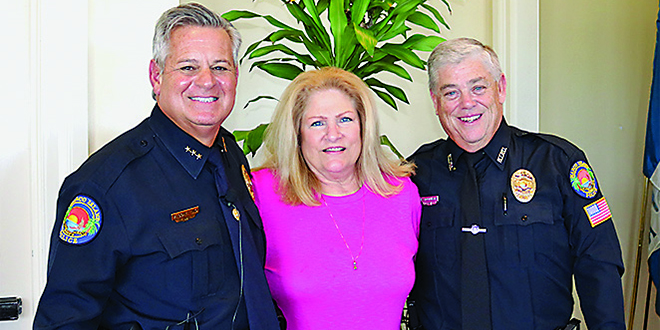 The Marco Island Police Foundation hosted its first Luncheon with the Chief of 2017, with newly installed President Dick Adams wielding the gavel presented to him by Curt Koon, outgoing president from 2016.

The first order of business was to recognize the efforts of the Sunset Grill, who hosted a fall fundraiser for Sergeant Mark Haueter to help defray expenses with his recent battle against a rare type of cancer that saw him undergo surgery late in the fall at the Moffitt Cancer Center in
Tampa, Florida.

Officer Clayton Smith presented Keith and Jennifer Reeves a token of the department’s appreciation for the work they did to help raise $35,000 for the Haueter Fund.  Haueter would later comment on their efforts, saying, “I can’t tell you how humbled I am for Keith and Jennifer’s efforts, along with all the wonderful outpouring of support from the department and the community as a whole.”

In all, the community has raised over $60,000 for Sergeant Haueter since he was diagnosed. He has since returned to duty and 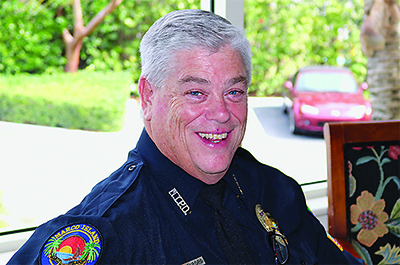 Photos by Steve Stefanides: Officer of the Year, Rich Stoltenborg.

is cancer free as of this date.

The department also awarded the Officer of the Year Award to Richard Stoltenborg who serves in the department’s Investigative Bureau.

Chief Al Schettino complimented Stoltenborg for his commitment to the department, as well as the community. Stoltenborg recently opened a boxing club on the island, Marco Island Boxing Club, which serves both youngsters and adults alike.

This followed his involvement in youth boxing while he was in New Jersey, where he was assistant director of the Dover Boxing Club.

Schettino also complimented Stoltenborg on his contributions reorganizing the department and assisting with closing a number of investigations and issues the department faced when City Manager Roger Hernstadt appointed Schettino as Chief.

Approximately 180 guests filled the room at the Hideaway Beach Club for the noontime luncheon.