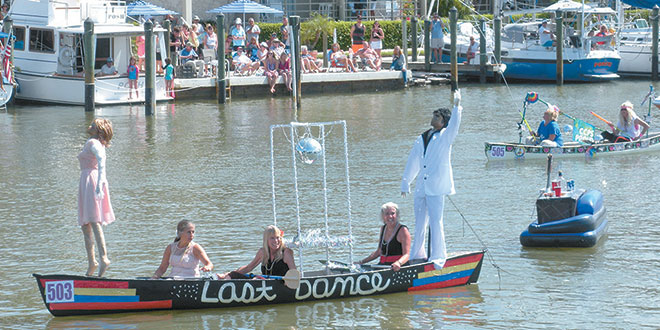 Maria Delosh was caught up in the groove as she danced alone to The Jackson 5’s “Let’s Dance and Shout” booming from speakers outside The Dock at Crayton Cove in Naples. She smiled, her umbrella raised in the scorching, Sunday afternoon sun, as around her swirled a festive crowd that was also enjoying the fun at the recent Great Dock Canoe Race.

Delosh said she’s been attending the annual, mid-May party since moving to Naples 15 years ago.

“It’s the people, the friendliness, everybody’s happy, everybody’s smiling, the canoes, the beautiful decorations,” she said. “Above all, the people are happy, smiling. Good energy.”

Her mood darkened when discussing the likelihood that it was the last hurrah for the popular, end-of-season, beginning-of-summer, community celebration.

But all may not be lost.

Vin DePasquale, founder and organizer of the Great Dock Canoe Race, said he has received several inquiries from people interested in taking over the event, which was to end this year.

“There are a couple of groups that are interested,” he said. “We’ll be meeting with them now that the event is over to see what their intent is. If they have a good intent, I’ll be happy to pass on anything that will 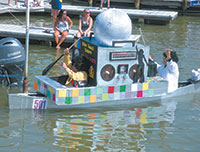 aid in making this a continuing effort.”

As always, this year’s race, billed as the 40th and final, drew about 5,000 spectators from both near and far. They observed from boats on Naples Bay or the area near DePasquale’s The Dock at Crayton Cove, where the races began and ended, and near the mid-point of the race’s long-course, Riverwalk at Tin City, which he also owns.

Another race tradition, the donation of $5,000 to a children’s charity, was also continued. This year’s recipient was the Collier County branch of the National Alliance on Mental Illness.

DePasquale described the decision to step away as organizer as “bittersweet” because the event provides so much enjoyment for himself, the volunteers and the community. However, he said it also requires a lot of work.

“We do it ourselves and we rely on maybe 40 or 50 volunteers to help us put it on,” said DePasquale. “We’ve done it for 40 years and we thought it might be a good moment for us to step back and take a break from it. We’ve certainly enjoyed it and it’s provided a lot of fun for the community. That’s always been a motivation for us.”

Marza Atwood, left, and Phillippa Mead and the disco-era look they donned for the Great Dock Canoe Race.

in 1977 as an end-of-season celebration for Naples restaurant owners and their staff that also marked The Dock at Crayton Cove’s first year of operations. From those humble beginnings it grew to include categories and courses for serious and fun-seeking competitors, a $1,000 prize for the best-dressed canoe, annual themes and more.

This year’s theme was “The Last Dance,” a nod to the year when the race began and the Donna Summer disco tune that ruled the airwaves, and the race’s possible end.

Marza Atwood and Phillippa Mead captured that era’s essence with matching glittery mini-dresses, round shades, go-go boots and wigs of curly, blonde hair. Calling themselves the “Disco Divas” they rowed in the “Tacos and Tequila Cantina” boat, when not enjoying the festivities on shore.

It was the first time they’d attended the race together since their senior year of high school in 1990 and they were saddened by the prospect of it ending.