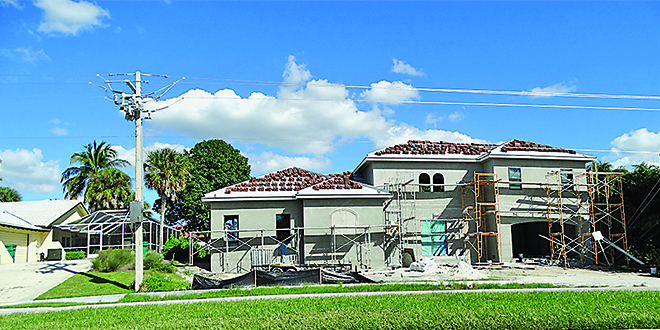 Photos by Steve Stefanides | (Above and below) Some of the issues identified for the LDC updates include new construction design, setbacks and more.

One of the most perplexing and complicated issues to be tackled by the city staff and Planning Board in the last year is moving forward. The consultant hired to review the Land Development Code (LDC) has completed Phase 1 and had 33 issues identified for review. Those issues were forwarded to the City Council at their last meeting and they, in turn, directed the Planning Board to proceed to review and create final recommendations for action.

The issues identified are wide ranging and cover a number of complex matters. The board will be reviewing the best way forward to deal with those items, which range from the inconsistencies between the Deltona Deed Restrictions and the city’s own current zoning code, to dealing with mobile food vendors on the island.

One of the more contentious issues that the board has to look at deals with side setbacks on new “mega-homes” being constructed, and how it affects existing neighbors regarding noise from air conditioning units, pool equipment and generators. Another related issue deals with storm water run-off and the impact that has with roadways and adjacent properties.

Another issue deals with commercial and residential design standards. This issue has been spoken of in detail, and one of the options that has been discussed includes the possible creation of an Architectural Review Board. That board would look at design and consistency with surrounding properties for both commercial and residential development when there are questions regarding a proposal.

For homes being built on 80’ wide lots, the construction of three-car garages facing to the front may be in jeopardy. Most being built today exceed the 45% rule presently on the books, and that requirement will be reviewed.

Height of structures and the point of measurement for setting that dimension are also being discussed. Presently, that measurement is taken from the base-flood elevations. However, in some instances that elevation may be increased 10 ft.+ over normal in some areas, causing a new structure to tower over older homes and affecting the existing owner’s quality of life.

The group could also come back to council with a recommendation to eliminate the C-2 Zoning designation, as presently there are no such areas on the island.

The Planning Board will meet on Friday, March 3 and Friday, March 17 in council chambers starting at 9 AM, as they continue their review of the LDC and seek to create a final report for action to be forwarded to the Marco Island City Council for their action.