Lakeland High just too much for MIA Rays 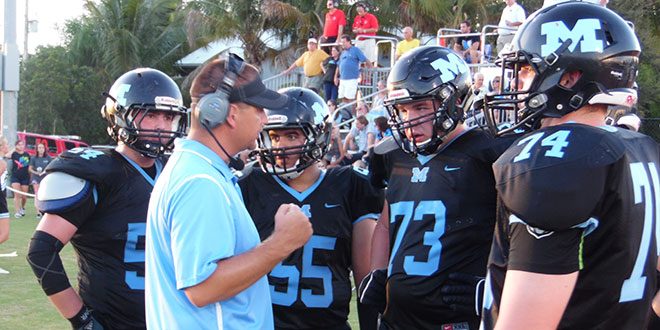 Coach Greg Fowler said he wanted to play strong teams going into district play so that his 2A Marco Island Rays will be ready for the type of competition that lies ahead.

He got just that in 5A Lakeland High of Orlando, ranked 19th in the state.

Lakeland took command of the overmatched Rays for a 59-13 win at Winterberry Park on Sept. 4.

It was the second straight week that Lakeland High scored 59 points in its wins.

Next up for the Rays is another non-district opponent, St. Andrews of 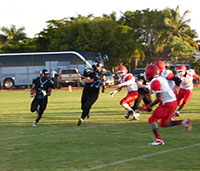 Not like riding school district buses, Lakeland came to town in three touring coaches. The roster numbered 62 players, compared to Marco’s 30. They even had two cheerleading squads.

Yet the Marco defense battled. Lakeland broke the scoring ice in the waning minutes of the first quarter. With the Rays offense struggling, Lakeland scored twice 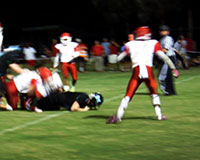 MIA’s Tyler Gresham used bull force to cross the goal for a touchdown.

in less than a minute in the second quarter, making it 21-0.

Tyler Gresham scored both touchdowns for the Rays.

He scored his first after the Rays drove from its 23-yard line.

But it didn’t come easy. They faced fourth down on the Lakeland 32 when the Rays called a time out.

Gresham suggested a play to coach Fowler, resulting in Gresham being wide open for a touchdown pass in the end zone from Andrew Fowler.

The Rays wouldn’t score again until they were trailing 35-6. The drive started with a Brian Flynn pass

catch, followed with runs by Patrick Michel, Fowler and Gresham. With the ball on the Lakeland five-yard line, Gresham wasn’t to be denied, bulling over defenders for the score.

Defensively, Austin Gross made a number of solo tackles. He also added some offensive punch with a pass catch and three strong runs.

Gresham, led on defense too, including wrestling the ball from a Lakeland runner to end a scoring drive. Michel ran the ball well in offensive spurts and played well on defense.

The Rays will finally have a district game at Moorehaven on Sept. 18.