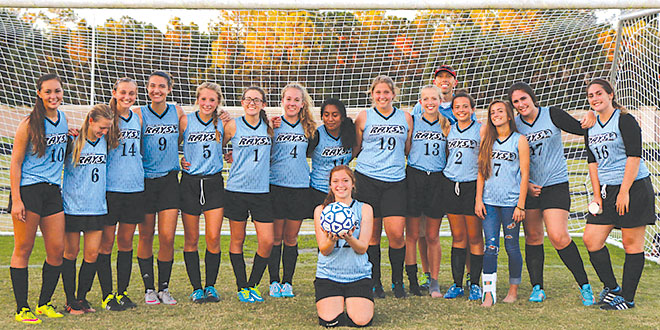 On Friday evening, November 6, after two years of futility, the Marco Island Academy (MIA) Girls’ Soccer Team exploded for the team’s first win, ever – a convincing 7 to 1 victory over Seacrest.

This is only the third season of existence for this team at the still very young MIA. Jim Watt became their coach last year, when the team went 0 and 16, the same as the year before under a different coach. Before this season, Watt told me that there were some pretty good freshmen joining the team, and that they would be heard from sooner or later. “I expect great things from this group of girls,” Watt said. The freshmen have now been heard from, scoring five of the seven goals, and making all five of the assists (two goals were on penalty shots.)

The Rays led by only 2 to 1 at the half. That was enough. Stiffened by a stout defense led by sophomore Julia Wagner, and backed up by intrepid sophomore goalkeeper, Kayla Kladis, the Rays held Seacrest scoreless for the final 40 minutes. Rational exuberance ruled after the final whistle, with the pumped up Coach Watt taking the whole team out to Panera Bread for sandwiches. “I was so happy for the team, I almost cried,” Coach Watt admitted, “I know what many of these girls have been through to get to this point.”

Their record now stands at 1 – 1 – 2, having tied Golden Gate and lost to Community School and Seacrest. The first home game is on November 16 against Community School, when the Rays will be looking to avenge an earlier 8 to 1 loss.