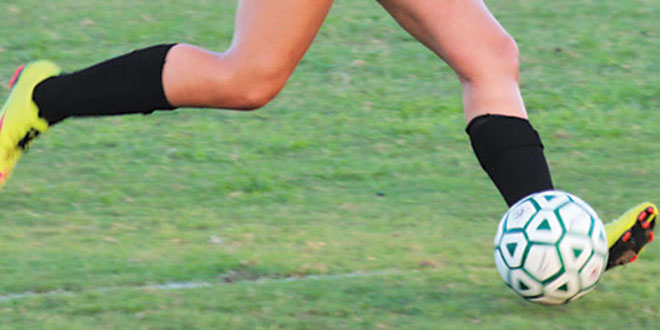 After a resounding victory over Seacrest on November 6, the Lady Rays lost a couple of tough ones at Southwest Florida, 0-2 and St. John Neumann, 2-5. Marco Island Academy was in both games all the way, but had trouble penetrating the defenses of both schools.

At Neumann on November 12, the Rays did get through for two goals, by freshmen Miranda Webb and Teagan Havemeir, assisted by freshmen Abi Merideth and Morgan Jones. Olivia Watt and Elizabeth Schulteis had to sit this one out with injuries. On November 16, the Rays played their first home game at Winterberry Park against a powerful squad from Community School, playing them for the second and final time this season. Pinned down against their own goal for most of the game, the Rays lost 0-9, the game being called in the first half. Games are stopped when one side gains an eight-goal lead. The girls played hard against a very good team.

In a home game on November 20, the Rays suffered what Coach Jim Watt described as a heart breaking 3-4 loss at Canterbury. “We came so close,” Watt said. Trailing 1 to 4 at half time, the Rays held Canterbury scoreless in the second half while scoring two. MIA scored on three out of 12 shots on goal. All three goals were scored by Abi Merideth, with assists on two of them by Miranda Webb and Julia Wagner. Merideth’s last goal came with three minutes left in the game, bringing the Rays to within one. Dribbling from midfield though five defenders, Merideth rammed it home past the goalkeeper, who had come out to defend. MIA goalkeeper, Kayla Kladis, let in only one Canterbury goal from the field. The other three goals came from penalty shots (Two hand balls and one flagrant, drawing a yellow card for Julia Cartwright). “Cartwright was clearly going for the ball,” Watt said, “To outplay the other team and lose on penalty shots is tough.”

Next game will be against St. John Neumann on December 1 at 5 PM at Winterberry Park, when the Rays will try to avenge their earlier loss.