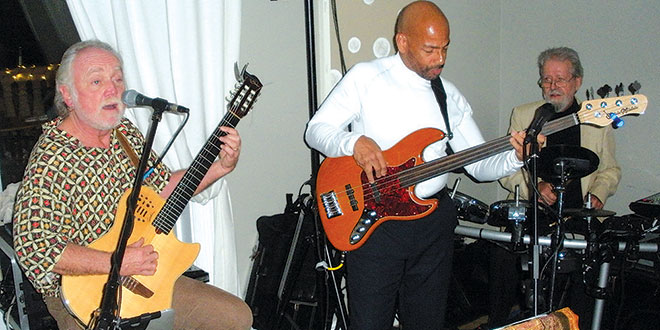 La Tavola Restaurant and Bar is spicing up Marco Island’s music scene with a dash of something different.

Cape Coral residents Tim Griffin (drums), Jimmy Allen (bass) and Michael Oakland (guitar and vocals) have been performing what Griffin describes as “showcase mini-concerts” at the restaurant about six weeks.

Guy Verdi, who co-owns La Tavola with his wife Lisa, said he comes from a musical family in South Philadelphia and grew up listening to jazz, crooners like Dean Martin and Sinatra, rock, and a wide variety of other types of music.

When Griffin and well-known Marco musician J Robert approached Verdi about performing in the restaurant’s lounge, they found an interested ear.

“We are trying to establish audiences that stay later, but also come to the restaurant,” said Griffin. 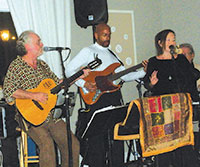 listen to what the musicians are doing and perhaps tap their foot, just something different compared to what everybody else does.”

Verdi hopes the Friday and Saturday engagements will encourage other musicians to travel to Marco to sit in or to attract unknown touring musicians who are in the area.

“That’s what I’m trying to create, a place where unknown musicians will come while playing the circuit and enjoy,” he said.

On a recent Saturday, Dave and A.J. DeHanas were seated front and center, enjoying the show, as Jo List, of Ft. Myers Beach, provided vocals on such standards as “Summertime” and Willie Nelson’s “Crazy.” List has performed with Muddy Waters, James Montgomery and Count Basie.

“We love jazz and she’s fabulous,” said A.J. DeHanas. “And Tim, who’s playing the drums, a good friend of ours went to high school with him and recommended we come out, and they’re very good. We’re very pleased.”

The trio starts playing at 7:30 PM and special guests aren’t known until mid-week, so Verdi suggested people call the restaurant at 239-393-4960 to learn who’ll be sitting in.

La Tavola is located at 961 Winterberry Drive. For more information about the restaurant and to view its menu, visit www.latavolarestaurantandbar.com.