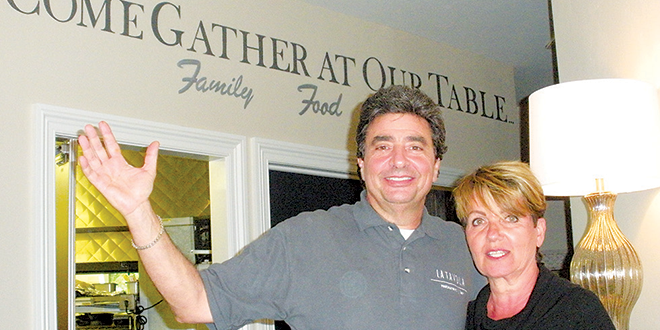 The traditional family gathering place – the kitchen table – evokes thoughts of heartwarming moments for long-time Marco Island restaurateurs Guy and Lisa Verdi. Such memories and their shared Italian heritage served to inspire the Verdi’s selection of a name for their new restaurant, which they have dubbed “La Tavola,” Italian for “the table.” “I really thought long and hard about it,” said Lisa Verdi. “I thought about how Guy and I, both here and when we travel to Italy and France to visit family, the best times and our favorite memories are always around the table with friends and family.” There are restaurants elsewhere in the country with that name, but for the Verdis, the significance of “La Tavola,” made it the right choice for their new venture. “For us, the meaning of it is the memories of the family, so that’s what we picked,” said Guy Verdi. “I’ve been saying it for years, ‘Family, food and friends.’ What more is there? “La Tavola” opened Feb. 2, in the Winterberry Drive location formerly occupied by Sasso’s International Cuisine & Seafood. The eatery’s cuisine is a melding of rustic Italian and American, with a distinctive flair. In fact, there are two separate menus: one for the dining room, where Italian cuisine is featured and another for the bar area, where the American influence dominates. “In the dining room, we’re doing old family recipes that we were brought up with,” said Guy Verdi. “It’s bringing the old tradition back to dining and refining it a little bit.” He said the bar menu allows their chefs, which includes Erin Wyman and himself, to exercise their creativity. “We can express ourselves with different small plates, tapas style plates and different flavors,” Guy Verdi added. “On (the bar) side, we can bring that forth.” The bar section also features traditional crafted cocktails, such as Old Fashioneds, custom Manhattans, Golden Cadillacs, Stingers and Pink Squirrels.”

All juices and flavored syrups used by the bar are made on-site, as are all pastas served by the kitchen. There is live entertainment in the bar from 7 p.m. to 10 p.m. on Saturdays, from 9 p.m. to 12 a.m., Wednesday through Saturday, there’s an “Industry Nights” happy hour for the island’s restaurant and hotel workers. La Tavola also offers vegetarian dishes, deserts and a diverse selection of wines, beers and spirits. This is the Verdi’s third restaurant on the island. They opened Verdi’s American Bistro in 1998 and operated it until 2012, before selling. The couple then operated Philly Grill for about 4 ½ years, before selling once again. The Verdis said they decided to return to the business when the Winterberry Drive location became available. “The restaurant business, in general, we enjoy it,” he said. “We enjoy being around people, we enjoy meeting people, we enjoy making people happy. We enjoy bringing people into our homes, no matter whether it’s Philly Grille or La Tavola – fine dining, middle dining – we just enjoy the whole feel of that.” Opening while the tourist season was at its height posed a challenge when it came to ironing out any new-business kinks, while serving more than 200 meals a night, said the Verdis. But now that that trial by fire is over and the bumps have been smoothed, the Verdis’ focus is on enhancing and expanding upon the operation’s solid foundation – whether it be revamping the menu to musical entertainment, to broadening the skills of their bartenders, they added. In the near future, the bar will be the site of special tequila and vodka tastings. “Everyone can get together and compete to see who has the best Bloody Mary and also benefit a charity,” said Guy Verdi. “La Tavola,” is located at 961 Winterberry Drive. For more information, visit latavolarestaurantandbar.com/ or call 393-4960.