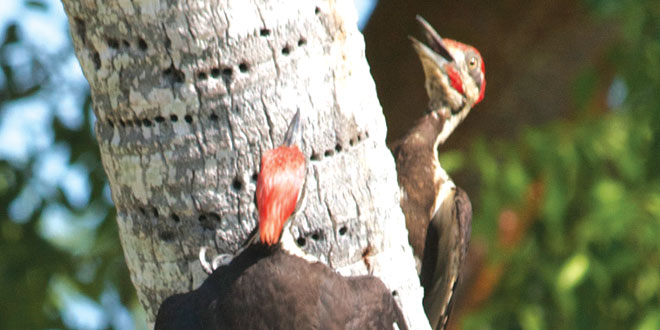 They are startling to see clinging to the side of a tree due to their large size – “crow size” – or about 17 inches long, with up to a 30-inch wing span and weighing about 14 ounces. They are standouts in nature with all black backs, rounded tails, with black and white strips on their necks to their bills; males with a red mustache and females with a white one. Both have the red telltale mohawk or “cap” of feathers on their heads. Their long bills (up to 2.4 inches) allow them to excavate large, rectangular holes in trees, typically in “snags” (dead standing trees). After peeling back bark, their long tongues tunnel in the cambium of a tree, seeking out carpenter ants and wood boring beetle larvae. Insects are 80 percent of their diet, but in winter they will forage for nuts and berries. If you have a suet-type bird feeder, you may get a visit from this very large woodpecker now and then.

They have a very loud call, called a “kuk”, which repeats, unfettered. Due to this call, the Pileated Woodpecker has been referred to as the “Jungle Bird.” They loudly drum on trees, hollow ones if possible to make the drum louder, to

warn other birds and animals of their territory, which can be as large as 4,000 square feet of forest. In Southwest Florida, they can be seen and heard in cypress forests, slash pine forests, hardwood hammocks, and in urban areas with mature trees. One has been observed several times in the Marco Island Eagle Sanctuary lands and just recently, a loud, noisy pair has been enjoyed by Goodland residents.

Florida Pileated Woodpeckers do not migrate and pairs do mate for life, so if seen in an area, they most likely are nesting in that area too. You will know if you are in their territory when hearing very loud drumming – some say like an ax! In mid-March, using an excavated cavity in a tree, the female will have an average of four eggs, but can have up to six. Both male and female take turns incubating the eggs and then feeding them by regurgitation when hatched. Young “fledge,” or fly, in about month. By September, the fledged young will leave the parents’ territory to forage and find their own territory and mates.

Some Pileated Woodpeckers have been known to live up to 10 or 11 years. They are an ecologically important species in the woods – they manage insect populations and when they abandon tree cavities, other birds, reptiles and small mammal species use the cavities as shelter. Seeing them, hearing their sounds and observing their bold behaviors adds to the exciting and diverse native experiences we are lucky to encounter here in Southwest Florida. Be on the lookout for the Pileated Woodpecker on your next hike in Big Cypress or even on a stroll through your own neighborhood!