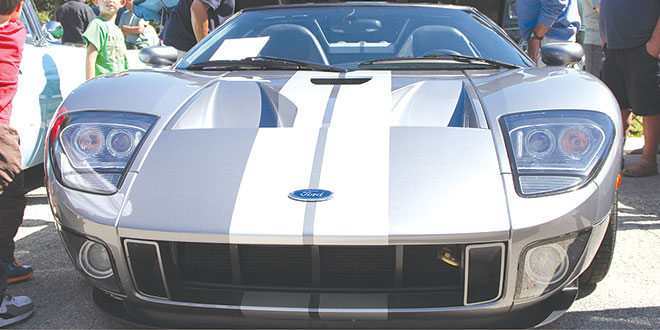 Cars came rolling into the Kiwanis Car Show early on a sunny morning. Kiwanis volunteers directed 165 drivers to park their automobiles around the Marco Urgent Care Center grounds. The cars were polished and cleaned, and the sun reflected brightly off the chrome. The cars lined up; some opened their hoods or opened their doors or windows to let the spectators do what they do best….look! And look they did, hundreds and hundreds of people came to enjoy the cars.

In addition to the

viewing cars, the Marco Magic Cheerleaders and the Irish Dancers performed, and the activities were emceed by DJ Steve Reynolds. There was plenty of food, popcorn and ice cream. Attendees voted for their favorite cars, and the kids were able to get in the act with a “Kid’s Choice” favorite category.

The votes were tabulated, and the following winners were present to receive their awards:

These winners, deemed the best of the best, collected their trophies with Kiwanian John DeRosa (front right). PHOTOS BY JESSICA SIMON

The annual car show is just one of several fun events Kiwanis Club holds throughout the year to raise funds for charitable giving, the focus of which is children. The Kiwanis motto: “Serving the Children of the World.”

The Kiwanis Club of Marco Island meets at 7:30 AM Thursday’s at Stonewall’s.