Kiwanis Car Show Back and Bigger Than Ever 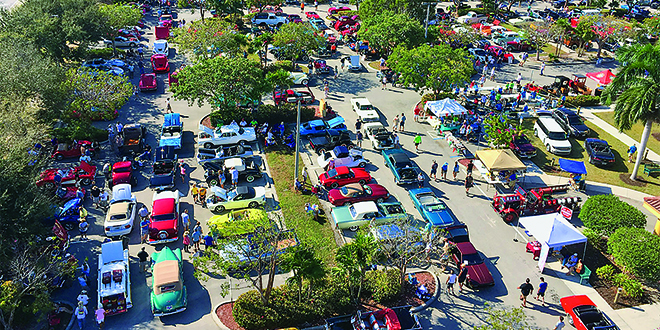 Photo by Mike Murphy | An aerial shot of the Kiwanis Car Show taken aboard the Marco Island Fire Department’s truck.

Over 200 vehicles, ranging in age and style, sat in the parking lot of the NCH Marco Healthcare Center for the 13th Annual Kiwanis Club Annual Car Show. Thousands of car enthusiasts and “motorheads” made their way through the rows of cars, discussing engines and paint jobs—proving once again that people on Marco Island sure do love their cars.

It was a sunny, warm day. The cars were vibrant and polished, glistening proudly in the sun. Car owners sat or stood near their vehicles ready to answer questions or just talk cars with other aficionados. In the background, emcee DJ Steve Reynolds played classic tunes and other crowd favorites.

The cars came in all shapes and sizes. Marco Islander Garrett Smith had perhaps one of the tallest cars at the show that day. He brought his white 1978 Ford Bronco—a vehicle he’s had for the past 11 years. Smith is the third owner of the car and uses it frequently.

“I live on the island. I drive it virtually everyday. It’s not what people in the car business call a ‘trailer queen.’ This is my island ride. I’m very proud of it and I have a lot of fun with it,” said Garrett Smith.

Keith Pershing of Island Automotive was back this year with the Marco Island Historical Society’s refurbished and working 1922 Ford Model T. It sat next to his 1963 bright red Volkswagen Bug, a stark contrast.

“A few years ago we restored it, to make it usable for local activities. It’s available for weddings and special occasions,” said Keith Pershing. 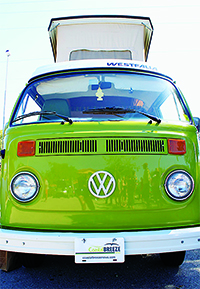 1978 Volkswagen Westfalia Bus, owned by publisher Val Simon, also made an appearance. The bus was hard to miss as it was stationed at the entrance of the event. The big green bus, lovingly referred to as an “old hippy van,” placed first in the Classic 70s category.

And it wasn’t just islanders who participated. Car lovers came from all over the county to show off their rides. Part-time Naples resident Bill Anner says he’s been interested in cars “all his life.” He had his 1990 red Corvette on display, and has been participating in the Marco Island car show for years.

The annual car show raises money for the Kiwanis Club Scholarship Fund as well as other programs geared towards students.

“Kiwanis would like to thank all the car entries to the show,” said Kiwanis Club member and creator of the car show, John DeRosa. “Without them there is no show. This was our 13th year for this show and it has allowed Kiwanis to help many, many children.”