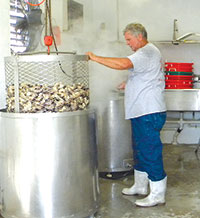 You may have already noticed that a familiar friend is back in Goodland, and they were sorely missed. Damas and Pat Kirk, and their daughter, Kelly, have returned home to update and operate Kirk’s Fish Company. The market has been back under family operation since October 2013. Their priorities are to serve the public and educate their customers about the industry.

“The fisherman wanted us to come back; fisherman love to work for fisherman,” said Pat. “And people who were customers 20 years ago are finding us again,” added Kelly. The Kirks were surprised at how quickly everything fell into place to facilitate their move from Naples, where they owned Captain Kirk’s Stone Crabs and Fresh Seafood Market for 17 years.

“We were all able to come back, I was finished with school, and we closed that chapter up there,” said Kelly, the future of the family business. “The goal was always to come back.”

Kelly said she wasn’t always sure she wanted to take over when her parents retired. She attended college with the intention of becoming a doctor, and earned a degree in criminal justice. After just a few years away from the business, she realized she missed it. Understandably, she 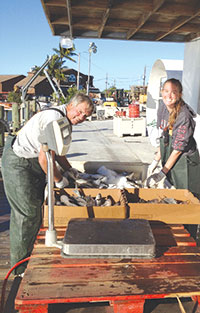 Damas and Kelly Kirk are glad to be back in Goodland, and it shows.

feels a bit of anxiety about what will happen down the road; after all, what her parents did in the 1960s is now outlawed, but above all she’s optimistic.

“I would love to be here long enough to teach people about what’s going on, what we deal with, why it’s gotten so hard, why prices are so high, what’s in season and when,” said Kelly, “I know it’s like starting over for my parents, but it’s starting new for me. I’m confident in what we’re doing, and how we’re doing it, and it’s only going to get bigger and better from here.”

With improvements and future plans, the Kirks are all hopeful for the outlook of Kirk’s Fish Company. Goodland residents have taken notice of the work already accomplished with the new landscaping. Pat said she hopes for a nice rainy period so everything will be lush for next season.

Regular hours and an outstanding variety of seafood available to customers are just a few things Kirk’s is now offering. They’ve updated some of their equipment, and predict much more work to come.

“We have a lot more to do, but we are taking it in baby-steps,” said Pat.

They will remain busy throughout the summer preparing for next season.