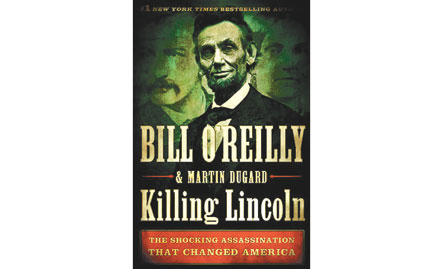 While reading this book I was entranced and when I finished, all I could say was, “Wow.” Back in the ‘50s when I was taking American History in Fort Myers High School, it was all I could do to stay awake. For one thing, there was no air-conditioning then and the class was right after I had eaten lunch. But to make things much worse I had the kind of teacher who felt she had covered all her bases if she had us learn the historical place, event or person’s name and the date associated with it. No effort was made to make history come to life. No stories were told, no costumes worn, nobody came into class who was witness to any event to add a personal touch; it was kind of the equivalent of “name, rank and serial number.” I was told that Abraham Lincoln was our 16th president, tall, ugly, wore a stove pipe hat, was born in a log cabin in Kentucky, gave the Gettysburg address (which we had to memorize), freed the slaves and was assassinated by John Wilkes Booth in the Ford Theater. And that was it! And that was probably quite a bit more than we learned about most other people or events in American history. There was little to peak our interest in learning more. And I am afraid she was pretty standard in her approach to teaching history, as are many of today’s teachers. Any American History teacher today who does not make Bill O’Reilly’s book on Lincoln required reading ought to be sent packing! Both my husband and I agree we were amazed at all that we learned in this fascinating, engrossing book. For example, did you know that Lincoln was killed a mere five days after the end of the Civil War?

Killing Lincoln begins in the very last few days of the Civil War in the spring of 1865 with Ulysses S. Grant and his Union army in hot pursuit of the men in gray lead by Robert E. Lee. The soldiers of the Confederacy had been fighting for state’s rights and slavery for four long years and, though, literally starving and shoeless, were still convinced by their leader that they could win the war and most were willing to fight until death. The description of these last days of the war is gripping and leaves you feeling the agony of the soldiers in the trenches, on horseback and in positions of leadership on both sides of the conflict.

When President Lincoln got word of the signing of the agreement to end the war he was quick to try to convince those around him that vengeance was not to be attempted but instead great effort should be taken to allow the country to heal and become one. This vision was not popular with many in the north and combined with the hatred felt towards him by those in the south he was considered to be one of the most despised men in America. He was warned repeatedly by those around him that his life was very much in danger and he, himself, felt the chances of an attempted assassination were very real. Despite that he continued to openly appear in public. At that time anyone wishing to speak to the president was allowed to approach him at any time to plead his case and, in fact, they were often found asleep on the floor of the White House itself awaiting a chance to speak to Mr. Lincoln.

Those who warned him of the imminent danger to his life were very correct in their assumptions and John Wilkes Booth was one of those wishing to not only kill the president, but to gain fame in the act. Initially the plan was to kidnap him, but that gave way to a plan to assassinate him and several others involved in the government, including Vice President Andrew Johnson and Secretary of State William Seward. The story of how Booth planned President Lincoln’s killing and the other attempted murders with the aid of his cohorts, how it was brought to fruition and the pursuit of these villains is a tale that is hard to put down. For years I have been of the belief that Dr. Mudd, who was held as a prisoner in Fort Jefferson in the Dry Tortugas, was an innocent man who only set the broken leg of a man off the street. It seems that he knew who he was treating and what he had done and did not turn him in, so, although he did not actually participate in the killing, he certainly aided and abetted the man who did.

Some reviewers have said that O’Reilly was a little loose in his facts. Some of the examples given seemed unimportant to me and I am not sophisticated enough historically, to know how significant others might be. However, I do know that this book brought history to life for me in a way that no other book has done. And the graphic, heartrending description of Lincoln’s dying had me practically in tears. This book is as good as any thriller you could possibly read and I highly recommend it to you.