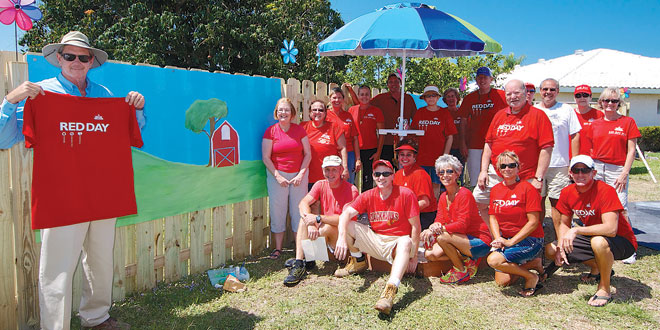 Keller Williams put out a call to their local agents in preparation for their annual Red Day. The challenge: help a child with autism. Red Day (which stands for Renew, Energize and Donate) is a local service day for Keller Williams agents held in communities around the world. So, the call went out, do you know of an autistic child who could use our help? There was no response. Finally, one agent, Ellen Henderson, responded, “If you don’t find anyone, my daughter has three year old autistic twins.” Plans were immediately set in motion to help not one child, but two!

Stephanie and Tim have four children: Gavin and Logan, the autistic twins; a brother Eli who is two and 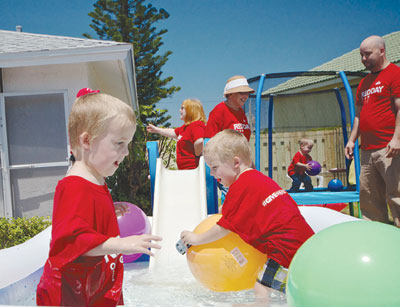 their newest sibling, Titus, who is just four months old. Before the twins were a year old, Stephanie suspected they may have a developmental problem. She researched it and stayed on top of it. They were tested and tested again. “Typically, a firm diagnosis is not made until a child is 24 months old,” said Ellen, the twins’ grandmother. “The twins were diagnosed here, then sent to the Dan Marino Center where a diagnosis as severely autistic was made at 18 months old. It is difficult for parents to cope with one handicapped child, but two is extremely challenging. Stephanie has had to be her own advocate, doing all the research, seeking out whatever programs and help she could find. Now they are enrolled in a program held at Lely Elementary four days per 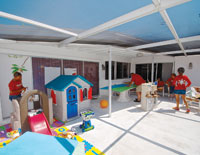 week and a speech therapy program one day per week. They have come so far since starting the program; they’ve learned to point to something they want which is a huge step forward in communication for them. Something so simple saves so much frustration.”

Keller Williams’ agents descended on the twins’ home on Century Court early in the morning on Red Day. The goal was to build a sensory garden for the twins. First, a fence was installed around the back yard. Panels were drawn and murals painted featuring some of the twin’s favorite characters. A sand box was put together complete with a table and chairs, shovels and pails. A toddler size trampoline was set up and an inflatable pool installed. Around the 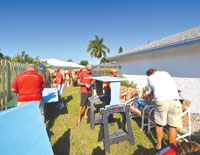 lanai, screens were repaired, a table and chairs was renewed with paint. A hammock for mom (or dad) and a playhouse was added.

“It is amazing what can be accomplished when many hands come together to complete a project,” quipped Donna Cottrell, a Red Day organizer. “Jim Moyer and Florida Built-Rite built special beds for the boys that offer them the comfort of being in close quarters while in their own bed. Florida Built-Rite also put up the fence donated by Affordable Fence, which would not have been possible without the help of everyone at the City of Marco Island. We really want to thank them for their assistance, too. Everyone worked hard and we couldn’t have chosen a more deserving family.” 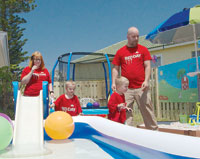 received a call the boys were on their way home and had just crossed over the Jolley Bridge. Several Keller Williams agents tidied up and others added last-minute finishing touches. Everyone waited patiently and guessed what would attract the boys first. The sliding door opened, the twins came out with an unmistakable look of wonder in their eyes – it was like Christmas. They looked at the swing set, the sand box, the pool, and back around again. The pool was the clear winner….one at a time Stephanie took off their shoes and in they went in, clothes and all!

“The sensory garden made for another successful Red Day. It is so nice to be a part of something like this and to feel like our efforts accomplished something really good! We wish the family all the best in the future!” said Donna.