Keeping up with Gulf Grouper Rules and Regulations

Sometimes keeping up with all of the fishing regulation changes here in Florida are like tracking stocks. If you miss an update, it may cost you. The FWC updated their 2011 Gag Grouper Closure and Fall Harvest season regulations on August 30, 2011. Below is a short synopsis of the observations and updates obtained from their website at www.myfwc.com

The first interim rule prohibited harvest of Gulf gag grouper in federal waters through May 31, 2011. At its February meeting, the Gulf of Mexico Fishery Management Council discussed a second interim rule that would continue the interim gag grouper closure through the end of 2011, but also allow for a recreational open season for gag grouper in Gulf federal waters from Sept. 16 through Nov. 15. This rule has been approved by the U.S. Secretary of Commerce.

These closures also prohibit anyone on board a vessel for which a federal commercial or charter boat permit for the Gulf of Mexico Reef Fish fishery has been issued from harvesting or possessing gag grouper in state waters of the Gulf of Mexico.

The FWC Commissioners approved rules that closed state waters of the Gulf of Mexico, excluding Monroe County, to the recreational harvest of gag grouper from June 1, 2011 through December 31, 2011, with the exception of a fall harvest season September 16 through November 15, 2011. These rules will be in effect for 2011 only. 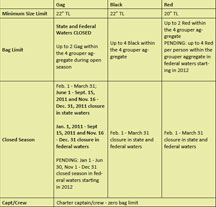 long-term management measures for gag and red grouper in federal waters of the Gulf of Mexico. These measures include:

• Increase the recreational bag limit for red grouper from two fish to four fish per person per day.

These measures are subject to approval by the US Secretary of Commerce and are expected to take effect in Gulf federal waters next year. The FWC may consider establishing consistent regulations for gag and red grouper in state waters of the Gulf of Mexico at a future Commission meeting.

Be careful of your boundaries…. The Collier/Monroe County line is actually located in Chokoloskee Bay, so Monroe rule apply just on the south side of Chokoloskee.

Be careful to follow the rules out there. Keep a close eye on the FWC’s website at www.myfwc.com for all current rules and regulations and it could save you some money and a lot of embarrassment.

Capt. Rapps has been fishing the Chokoloskee area for just over 20 years. He offers expert guided, light tackle, near shore, and backwater fishing trips in the 10000 Islands of the Everglades National Park. See the online availability calendar, booking info, videos, recipes, seasonings, and first class web site at www.CaptainRapps.com and you can reach him at 239-571-1756.