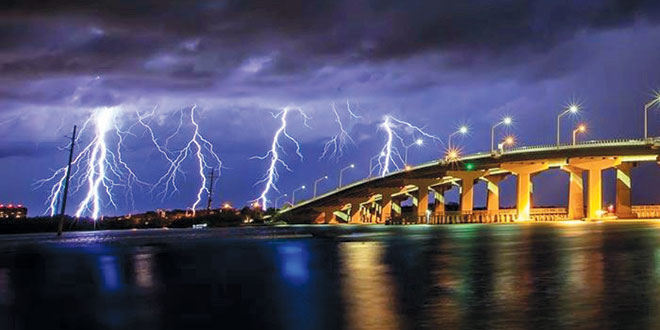 The summer of 2016 may be seen by many to be the summer of storms. Islanders who have made Marco Island their homes for a number of years now seem to agree that the storms of this summer have been more frequent than past years.

“Mother Nature has certainly provided us with some awesome fireworks this summer,” said Bill Holmes, who has been on Marco Island since 1995 and is the manager of the Summit House Condo Association on the beach.

“People have to be aware of their surroundings and the need to be aware of changing weather conditions when either at the pool or enjoying the beach,” said Holmes.

No one was more aware of that than Lori Fisk-Bitner, who last week was enjoying a day at the beach with her three children. Fisk-Bitner was in the process of moving her children off the beach when her 15-year-old son Brennan became a victim of a proximity strike and subsequently lost consciousness for approximately 30 seconds.

Marco Island Fire Rescue and Collier County EMS treated and transported the teenager to a local medical facility where he was released after evaluation.

Sergeant Matt Goetz of the Marco Island Police Department was on duty the day that the teenager was struck. “He was a very lucky young man,” said Goetz. “We were being peppered by an unusual amount of strikes that day on the beach, but some of the folks we asked to seek shelter were reluctant to leave their places on the beach. In fact one couple told an officer they just wanted to sit under their umbrella and watch the lightning dance around offshore. We assured them it wasn’t safe and they reluctantly left the beach for shelter,” said Goetz.

“People need to be aware that lightning can strike as much as 10-15 miles away from the rain event that it accompanies,” added Goetz.

Some of the areas most vulnerable during a storm are:

Maintaining an awareness of your surroundings and having a plan in case of an approaching event are two of the most important things that might help you stay safe during strong storms that become an issue during the hot summer months in Southwest Florida.

There have been seven lightning deaths recorded in Florida through August this year and the total for the nation stands at 32 through August, compared to a total of 27 for all of 2015.