Keep an Eye on the Moon 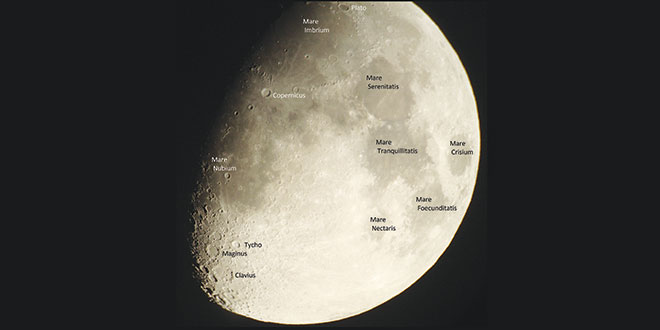 Photo taken through a ten inch f/5 telescope at 96x on June 26th when it was just past 1st Quarter. SUBMITTED PHOTO

We usually ignore the Moon in this column, but in many ways it is the most interesting object in the sky. It is the only celestial object whose surface can be examined in detail from your back yard for example. Although the Moon appears blindingly bright to dark adapted eyes, in reality it reflects hardly more light than old asphalt does.

Intuitively one would think the Full Moon would be the best time to observe surface features, but this is quite wrong. Compared to Earth the Moon is a relatively colorless world; its surface appears to consist mostly of grey rock of two different shades. This means surface contrast is very low. Combined with the fact the Sun is straight up (from the Lunar viewpoint) and no shadows are being cast makes the Moon look very flat and mostly featureless during its full phase. The best time to observe surface features is just after the Sun rises over the region you wish to examine. Crisp, dark shadows give the Moon a three dimensional aspect completely lacking during the full phase.

On July 24th the moon will be at First Quarter and will blot out the lesser stars until well past midnight.   With the naked eye you can clearly see the Moon has two types of surfaces – the darker maria and the lighter highlands. The maria (mare is singular) have been given colorful names in Latin and are generally referred to as “seas” although they are merely dry lava flows. The circular sea in the middle of the northern hemisphere is Mare Serenitatis (Sea of Serenity), just to the southwest of Mare Serenitatis is Mare Tranquillitatis (Sea of Tranquility). To the east of Mare Serenitatis is the Mare Imbrium (Sea of Rains). The Sun has not yet risen over the mostly hidden Oceanus Procellarum (Ocean of Storms), but the crater Copernicus lies on its western shore. South of Copernicus is Mare Nubium (Sea of Clouds). Several other seas are listed on the photo.

The photo above is labeled with features commonly visible through binoculars (albeit the photo is considerably more detailed); but the maria are plainly visible even to the naked eye. If your binoculars are held steady, several of the larger craters can be seen. Look again at the Full Moon and you will see they have all “disappeared”! One big exception to the craters disappearing is Tycho. During the few days surrounding the Full Moon the large crater appears to emit rays covering half the surface of the Moon drawing your attention towards it. These rays are debris thrown out by the impact that created the crater.